Please ensure Javascript is enabled for purposes of website accessibility
Log In Help Join The Motley Fool
Free Article Join Over 1 Million Premium Members And Get More In-Depth Stock Guidance and Research
By Matthew DiLallo – Feb 21, 2014 at 10:15AM

Drillers like Pioneer Natural Resources and Concho Resources Inc. are expected to double production over the next few years. Here’s one company poised to profit off the back of that growth.

The Permian Basin is the gift that keeps on giving to energy companies. Not only have drillers pulled out nearly 29 billion barrels of oil since it was first discovered in 1921, but at least that much oil is still lurking deep in the heart of Texas. Because of this, today's Permian Basin focused drillers like Pioneer Natural Resources (PXD -0.09%) and others see current production doubling over the next few years.

As the slide below shows, Atlas Pipeline Partners has enjoyed significant processing growth over the past few years. 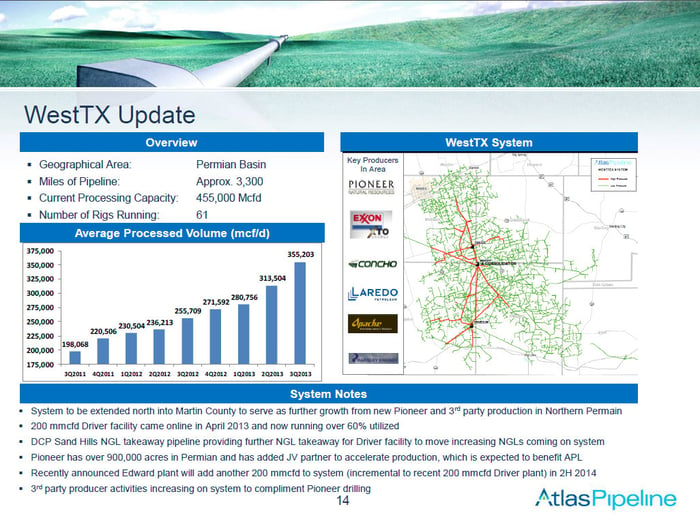 Because of this relationship Atlas Pipeline Partners is profiting off of the growth of Pioneer Natural Resources. Further the company can complement that growth by taking on more third party activity that is accelerating as more companies focus on the Permian to grow production in the region.

There are so many ways to profit from the oil and gas boom. While drillers like Pioneer Natural Resources are the obvious choice, investors shouldn't miss the fact that midstream companies like Atlas Pipeline Partners are in a unique position to profit as these companies keep on drilling.

Three more stocks profiting off of the energy boom