Several electronic health record, or EHR, systems vendors might be getting the boot in 2013, according to Black Book Ranking's annual survey of almost 17,000 EHR users. Is there a way that investors could potentially profit off of what is being dubbed "the Great EHR Vendor Switch"? Maybe. Here's how you just might make money from this possible EHR upheaval.

Survey says
First, we need to glean as much from the internals of the Black Book Ranking survey as possible. A surprisingly large number of EHR users want to change systems. A full 17% plan to do so within the next year. 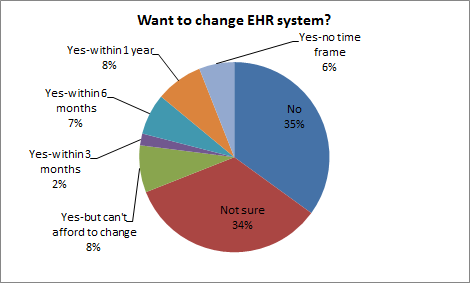 Some of those who want to switch systems apparently aren't too happy with their current technology platform. That's particularly true for customers with on-premises systems. 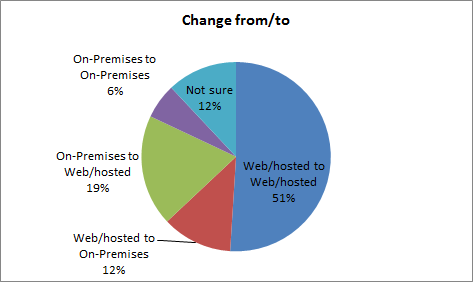 By far, the biggest reasons for wanting a change stem from the platform not being a good fit. 80% of the users polled said that their system doesn't meet the needs of their practices. About the same amount stated that their practices didn't determine needs adequately before selecting the system that was implemented.

There were a few other clues in the survey responses that can help us in our quest. When asked what would disqualify a vendor as a replacement choice, 32% said mergers or acquisitions. Another 26% answered with "senior management in disarray."

Most likely to succeed -- and fail
These questions and responses should be helpful as we attempt to figure out which companies might be winners and losers in the EHR vendor shuffle. Of course, our candidates are narrowed down a lot, since we'll only consider publicly traded vendors that derive most of their revenue from EHR technology.

One premise that I would argue makes sense to adopt is that vendors that have seen increasing growth throughout the past year would be the least likely to be kicked out. The thought here is that word gets out on the street when other customers are unhappy and impacts new sales as prospects hear bad things from existing customers. With that in mind, let's look at sales growth for the following EHR companies: Allscripts (NASDAQ:MDRX), athenahealth (NASDAQ:ATHN), Cerner (NASDAQ:CERN), Greenway Medical Technologies (NYSE: GWAY), and Quality Systems (NASDAQ:NXGN) 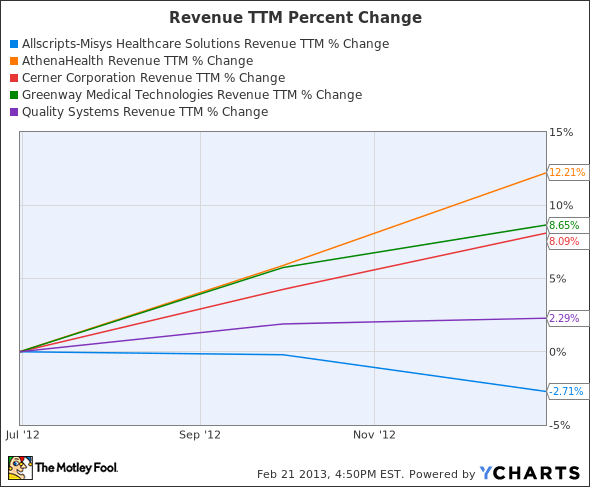 Another factor to consider is recent customer rankings of EHR systems. We would expect that systems consistently ranked highly would be less vulnerable to losing customers and vice versa. Below is how our five publicly traded companies stack up.

If we consider all of the above criteria, athenahealth stands out as the vendor most likely to succeed. Revenue growth has been very strong and outpaced all the others. The company ranked highest in three of the four customer ranking categories shown above. With its software-as-a-service products, athenahealth should appeal to the 70% of EHR users who expressed preference for replacing their current system with a Web-based or hosted system.

The bottom two candidates are Allscripts and Quality Systems. However, I'd say that the vendor most likely to lose customers in 2013 probably is Allscripts. My hunch is that respondents had the beleaguered company in mind when they listed their top two reasons for not picking a new vendor as potential merger or acquisition and senior management in disarray. Allscripts is also the only one of the bunch that experienced revenue declines over the past year.

The long and short of it
Investors could simply buy athenahealth with the assumption that it stands to gain the most with "the Great EHR Switch" this year. You could sell Allscripts short. Alternatively, you could do both. As long as athenahealth outperforms Allscripts (even if both go down), you win. You could even use LEAP options with this approach to reduce the amount of money at risk.

Keep in mind that there is no guaranteed strategy. This one is no exception. Athenahealth's valuation is sky-high. Any hiccup could send shares falling. Allscripts could find a buyer in 2013, which would likely boost the stock. However, if you're looking for a way to profit from EHR fruit basket turnover, this could be a way to do it.