Hi, my name is Anders. I'm a Netflix (NASDAQ:NFLX) bull, and not the least bit ashamed of it.

I've been known to compare the digital video expert's current stock prices with Apple (NASDAQ:AAPL), circa 2003. Skeptics point to Netflix's expectation of negative cash flows in 2013 and say the company is doomed. Well, Apple's cash ran red in 2003, too, as the iPod/iTunes business found its feet and Steve Jobs was cooking up the iPhone. Five years later, the stock had jumped 2,700% as Apple's early investments paid off in spades.

Yes, I see a similar story shaping up for Netflix. The company is building a fantastic future right now. It's expensive, but you gotta spend money to make money.

I'd like to walk you through three possible versions of the next five years. In one, CEO Reed Hastings achieves everything he ever dreamed of. In another, pretty much everything goes wrong. The third tale balances risks against opportunity, and is the most likely scenario in my opinion.

And then I'll tell you what Netflix is worth under each of these scenarios. 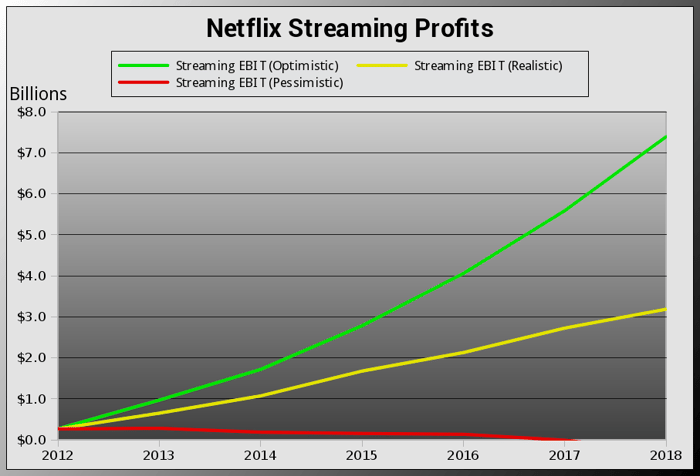 Dream a little dream
Hastings learned his lesson from the Qwikster debacle and plays his cards to perfection from now on. House of Cards is an Emmy-winning hit that launches a 10-year franchise, followed by other top-quality shows in every genre that matters. Whether you like witty sitcoms, science fiction drama, or gory horror, Netflix has you covered with exclusive content. Only the best scribes, helmers, and thespians need apply, because this is high-budget, high-quality stuff that can stand up to HBO's finest.

On the strength of a generally well-rounded content portfolio with the added spice of award-winning exclusive shows, subscribers sign up and stick around like never before. By 2018, Netflix reaches 84 million American households.

The same factors accelerate the company's overseas growth as well. All this extra money in the bank enables quicker rollouts in new markets. Netflix blankets Europe by 2014, turns a reliable profit on international operations by 2015, and jumps to Southeast Asia the same year. In 2018, the company has 78 million international accounts and 162 million total subscribers.

The result? Streaming operations generate something like $7.4 billion in operating profit just five years from now. The company will be a fully mature media giant by then, equally adept at content distribution, production, and technology. Hastings might start running video-on-demand operations for cable companies by then. Movie-themed theme parks, maybe.

It would be a bit early to call Netflix a threat to Walt Disney (NYSE:DIS) at this point, but check again in 2023. The company will eventually have more money than it could deploy in its current business model and would simply have to diversify into a complete media package, just like the House of Mouse. If you're going to copy anybody, might as well stick with the industry's best.

Oh, but everything cannot possibly go as planned. What if absolutely nothing works instead?

Nightmare in Los Gatos
Uh-oh. House of Cards is a critical success (already proven) but doesn't do diddly-squat for Netflix's subscriber hunt. Every original show bombs or slips away, and Hastings stops making them as soon as the existing commitments have been filled. If anything, the grand experiment only increases subscriber churn.

Bidding wars with Hulu and Amazon.com (NASDAQ:AMZN) limit what movies and TV shows Netflix can get its hands on, and every important deal falls into the enemy's hands. Amazon is bigger and richer, after all. Hulu is owned by three Hollywood studios. One little DVD-powered upstart can't possibly put up a fight. Hastings expects to get at least 60 million subscribers in the long run but misses that goal with just 54 million accounts in 2018.

The same story plays out in South America and Western Europe. Growth is slow and painful, not to mention expensive. Operating costs balloon, and Netflix would be lucky to reach France and Germany by 2016. Local rivals and some more Amazon resistance further limit overseas growth. That's 41 million non-U.S. subscribers in 2018, or 95 million overall.

This time, costs escalate out of control and the entire operation in still unprofitable in five years. Revenues may be booming in comparison with 2013, but at what cost? Forget about diversification and world domination -- at this point, Netflix should count itself lucky if Coinstar (NASDAQ:OUTR) would buy its DVD business for a quick cash infusion. Amazon is beating Netflix in every streaming market is cares to enter, Coinstar (now simply renamed Redbox) owns the physical media market worldwide, and Netflix has nothing going for it.

That's not going to happen, either. Let's get real.

The real world
Some of those original shows work out, and some don't. A handful become lasting franchises with repeatable business value, and they make a measurable difference to subscriber acquisition and loyalty. But some sink without a trace and are never seen again. Just like in the traditional cable TV world, failure is the norm. But the hits are at least worth the trouble.

Bidding wars and rivalries turn out to be healthy for the newborn streaming industry overall. Amazon wins some deals, Hulu others, new entrants grab a few tasty morsels. But Netflix finds enough quality stuff to get by and is not forced to overbid on potentially irrelevant items. When the price rises too high, Hastings will walk away, like he did from Starz and Downton Abbey. The studios love having a healthy second market and are not shy about offering an even-handed selection of exclusives to keep the bidders bidding.

Elsewhere, Netflix continues to invest in new geographic markets with a steadily growing cash inflow setting the pace. Add a handful of Western European countries next year, and then cover that continent two years later. The existing territories mature in a solid but not explosive manner. And so Netflix reaches 59 million overseas subscribers in 2018, or 133 million including the United States.

Costs increase but don't run out of control. In five years, Netflix makes $3.2 billion in operating profit from streaming operations.

This is the most likely scenario in my eyes.

What does it all mean?
Note that I kept this discussion simple. I'm not counting on seeing Netflix raise prices along the way, even though the company could probably get away with adjusting its price tags for inflation. Neither do I expect the company to sell any new products, like game rentals or pay-per-view premium movies. The ultra-high-definition and 3D services are treated as freebies with a regular $8 subscription. The profitable but shrinking DVD service is given no value at all, even though it certainly isn't worthless. I've chosen to err on the side of caution. These estimates are conservative, except for that pie-in-the-sky 100% success scenario.

A discounted cash flow analysis of the worst-case scenario would put a $7.1 billion total price tag on the company, or $126 per share. The stock trades 45% above that level today. I see this level as a fundamental long-term support. Assuming that Hastings doesn't do anything crazy to break the company in ways I haven't thought of yet, I would absolutely buy more Netflix shares below $126. There's no reasonable justification for prices lower than that. None at all.

The super-duper future is equally unlikely to materialize, but it's a useful exercise anyhow. The intrinsic value of the stock would be $118 billion, or $2,114 per share. That's an easy 10-bagger in five years, in the same ballpark as Apple's mid-2000s run to the stars.

But yeah, the middle-of-the-road outcome is the real deal. If you forced me to do a Monte Carlo analysis of Netflix, I'd give this track an 80% probability, with 10% to each of the other cases.

Here, the company's intrinsic value is $538 per share for a $30 billion market cap. Share prices need to triple before hitting that level, or you could see it as a 66% margin of safety. Even if I assume that the growth story will hit a brick wall in five years, it's still a $306 stock. That's with all the conservative caveats above. Any (reasonably handled, unlike Qwikster) subscription price increases, new product ideas, or even a DVD revival would just add more value on top.

So this is why I see Netflix as the next Apple-style hypergrowth stock. It's already one the most successful picks in CAPS, and the largest individual holding in my personal real-money accounts. I plan to ride Netflix over the next few years like early fans rode Apple 10 years ago.