The world of blockbuster drugs is changing, though, thanks largely to the patent cliff that many companies have gone over. How do the big pharmas stack up in the battle for blockbusters? Let's take a look at the top five pharmaceutical companies by market cap to see how their billion-dollar franchises are doing these days.

These companies are valued way up there, so most of us would probably expect that each one of them would bring quite a few blockbuster drugs to the table. We would be correct, although there perhaps aren't as many blockbusters in the group as some might think. 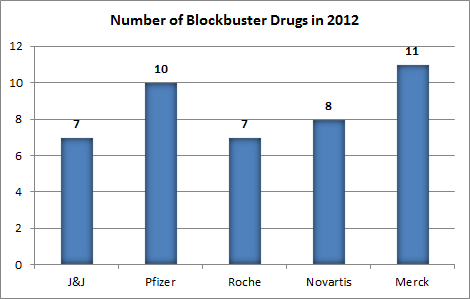 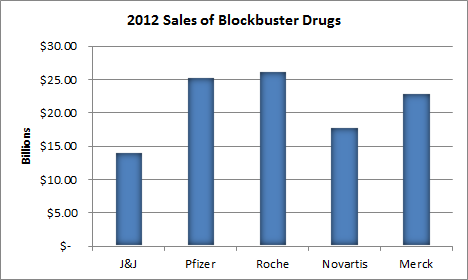 Roche had three drugs that topped $6 billion in sales last year -- Mabthera/Rituxan, Herceptin, and Avastin, catapulting the company to the top spot in terms of blockbuster sales. Remicade brought in over $6 billion in sales for Johnson & Johnson in 2012 (plus another $2 billion for Merck.) However, none of the other big five pharmas had a drug that made more than $6 billion.

Did the impact of the patent cliff result in fewer blockbuster drugs for the big five last year? Not much, although there were some different drugs in the mix. The total number of blockbuster drugs between all five pharmaceutical companies was 43, only one less than in the previous year.

Big and bad
An old expression says that "the bigger they are, the harder they fall." That saying holds true for big drugs. While the loss of patent protection didn't significantly impact the number of blockbuster drugs for the top pharmas, there was a larger efffect on sales for those drugs. Total combined blockbuster revenue decreased in 2012 compared to the prior year by more than 4%.

These steep drops highlight the potential dangers of a company becoming overly reliant on a handful of blockbuster drugs. Several big pharmas that didn't make our top five group have been hit hard in recent years by heavy dependence on one or two major moneymakers. Are the biggest of the big pharmas at risk? Some definitely are. 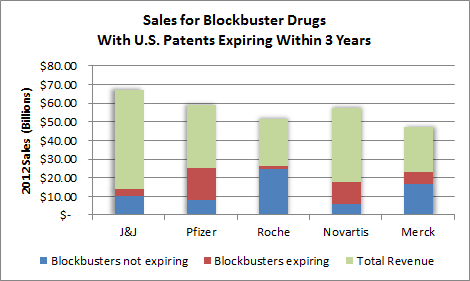 Any blockbuster drugs from 2012 with U.S. patents already expired or expiring by the end of 2015 are included in the "blockbusters expiring" category. Of course, just because a drug goes off-patent doesn't mean that sales will necessarily fall immediately. However, the data does point to potential risks in the years ahead for some companies.

Pfizer carries the most risk related to blockbuster drugs that have either already lost patent exclusivity or soon will do so. Declining Lipitor sales continues to be the biggest challenge for the company. Novartis appears to have the second-highest blockbuster risk, due in large part to Gleevec. The cancer drug, which had 2012 sales of $4.7 billion, loses U.S. patent exclusivity in 2015. Novartis is already experiencing a dent in sales with the patent expiration of Diovan last year.

Busting loose
Looking ahead, the big pharmas also stand to gain new drugs in the billion-dollar club. While Novartis will likely see sales decline, the company has two drugs, Tasigna and Galvus, that are on the verge of becoming blockbusters. J&J is close with Zytiga. And there are plenty of other rising stars.

It can be easy to place too much attention on the biggest drugs, though. The reality is that for most of these pharmas greater revenue is generated from the many drugs that won't ever be blockbusters. Investors, therefore, should focus on the big picture for these companies and not just the big drugs. Five $200 million drugs are just as good -- and maybe even better -- than a single billion-dollar drug. One billion dollars still has a nice ring to it, no matter how it comes.