AES (NYSE:AES) reported earnings this week, beating revenue estimates and squeaking in above analysts' earnings expectations. Its stock shot up 6% on the news, but does this utility have what it takes to pull in long-term profits for your portfolio? Let's look at this quarter's earnings and some long-term trends and decide for ourselves whether AES makes the A-list.

On the bottom line, the utility slid past Mr. Market's expectations by $0.01, with non-GAAP EPS clocking in at $0.32. Compared with Q4 2011, earnings for this quarter represent an almost 40% increase.

For a peck of long-term perspective, AES has grown sales 19% over the last years. In the same period, net income dropped 173% and dipped into the red for 2012. 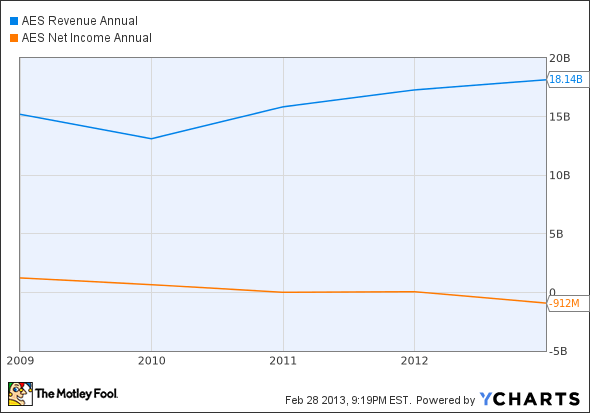 AES around the world
When it comes to diversification, it's hard to argue with AES. Not only does the company offer the stalwart opportunity of a utility, but its 27-country spread gives it a level of international diversity that is unmatched in its sector. Here's a quick breakdown of AES's $2.1 billion worth of 2012 pre-tax contributions: 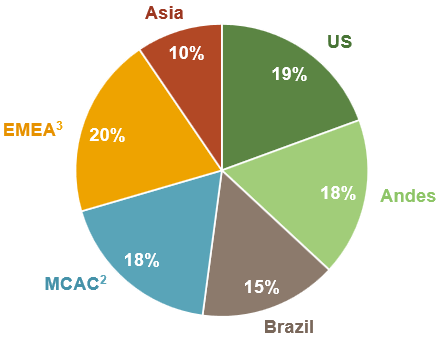 That said, broader is not always better, and AES is working hard to cut costs across the board. In addition to skimming the fat off corporate spending (to the tune of $90 million in 2012), the utility sold 14 assets in nine countries over the past year. Of the $946 million in shed assets, the largest chunk came from $284 million Brazil telecom Atimus, a non-core asset stinking of "diworsification." AES looks to be focusing its geographic plans, following the likes of international utility National Grid (NYSE:NGG), which offers global diversification through its United Kingdom and United States divisions, but without the high-risk worries of emerging markets.

Even with the clunkers off its sheets, AES still has an upward battle to keep costs competitive. The company expects to spend around $500 million over the next three years in the U.S. to replace and/or upgrade its older-generation facilities. According to CFO Thomas Flynn, environmental costs will account for about two-thirds of the company's $300 million proportional cash flow decline for 2013.

For utilities based solely in the United States, environmental regulation is pushing massive upgrades across the sector. Southern (NYSE:SO) recently received approval for two new nuclear facilities and expects to spend $16.5 billion in the next two years to kick costly coal out of its energy portfolio. During its Q4 conference call, Duke Energy's (NYSE:DUK) CEO called out Southern for showing up late to the modernization party, celebrating his own company's progress. In total, Duke expects to spend approximately $12 billion to retire 6,800 MW of coal capacity. Ahead of the game, Exelon's (NASDAQ:EXC) nuclear-centric generation allows it some wiggle room to keep capex costs low and (hopefully) margins high.

Balance-sheet battles
AES's 4.9 debt-to-equity ratio is higher than 98% of its peers, and the company has worked hard over the past year to balance its books. The company spent just more than 50% of its $1 billion in 2012 discretionary cash flow to pay down debt. In 2013, AES expects to dish out at least $350 million more to put a dent in its $6 billion of recourse debt.

AES isn't wooing any income investors with its 1.4% dividend yield, but the company's valuation could pique the interest of value voyeurs. The company's stock has fallen 38% over the past five years, and its 0.5 price-to-sales ratio is well below the industry average. AES expects its new construction projects to deliver a 14% return on equity and cash yield by 2015, potentially pushing sales even higher.

Does AES make the A-list?
In an earnings seasons filled with falling sales, AES surprised analysts by rocketing its revenue. The company is quelling its bad diversification habit and seems to be taking its debt load seriously. But even as the utility pulls up its top line and streamlines operations, its dinky dividend and lackluster margins haven't convinced me that AES is the best place for my bucks. I'll keep a close eye on this utility over the next year, so check back to see whether AES' Q4 results turn out to be a fluke or a turnaround.