Mobile operating system platforms live and die by how robust their complementary content ecosystems are. Of course, one of the biggest sources of content on mobile platforms is now the almighty app. Even the venerable Wall Street Journal now has a dedicated section, The Business of Apps, with one of the recent articles describing how the app economy is creating a whole new line of work for many small developers.

Competition is stiff, though, since there are relatively lower barriers to entry than the software industry has historically seen. There's still plenty of opportunity and numerous success stories of small independent developers hitting it big, like Imangi Studios and its smash hit game Temple Run. Imangi is just a husband-and-wife team.

Unfortunately, it's getting harder for indie developers before it gets easier, and Google (NASDAQ:GOOGL) Android is largely to blame.

Fragmentation has long been cited as Android's biggest weakness, and a recent report from Flurry Analytics shows just how out of hand it's gotten. While fragmentation isn't entirely unique to Android, it's far worse on that platform than any other due to its open nature. In fact, Apple (NASDAQ:AAPL) added an additional layer of fragmentation to iOS just six months ago when it introduced the iPhone 5 and brought 4-inch displays and resolutions to its platform.

However, that's negligible when you consider the plethora of different Android devices on the market, each with different specs that developers need to target like display size, aspect ratio, and resolution, among others. Microsoft tries to balance these considerations by supporting a limited number of resolutions in Windows Phone.

Overall, if an app developer wants to be able to reach 80% of all active devices, they would need to support 156 different models. 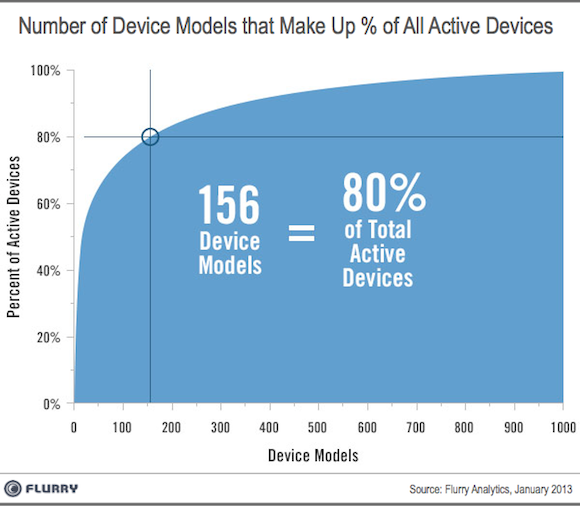 That figure changes depending on what percentage of devices a developer wants to reach, and shooting for 100% approaches 1,000.

Fragmentation also includes software versions. Since Apple pushes out iOS software updates quickly and seamlessly, it sees prompt uptake of the newest versions. A separate study from Chitika last week showed the most recent iOS 6.1.2, a very minor update, had reached 35% penetration in just six days. That wasn't even a major version update; iOS 6 (released September 2012) and later is now on 84% of iDevices.

Google's most recent data on Android version distribution shows 2.3 Gingerbread, originally released in December 2010, is still powering 44% of Android devices. Android 4.0 Ice Cream Sandwich (released November 2011) is up to 29%, and 4.1/4.2 Jelly Bean (released June 2012) is on 16.5%. Carriers and OEMs are the biggest hurdles to pushing out timely software updates.

That means that one minor iOS update (6.1.2) was able to reach higher penetration in six days than a major Android update (4.0) has been able to in 15 months.

It's mostly Google's fault
Flurry sees overall model fragmentation as putting the squeeze on small developers, since the incremental cost in time, energy, and money of supporting additional models simply isn't worth it at a certain point, and the natural response is to target the fewest devices that reach the most users for the sake of efficiency. This growing importance of scale is one reason why Flurry even suggests that the app development market is "ripe for consolidation."

The researcher's data also shows that on average, there are over 14 times more users on iOS models than on a given model for other platforms, meaning that developers can reach far more users on Apple's platform for a specific model.

As the biggest contributor to device fragmentation throughout the mobile landscape, Android is making life difficult for the little guys.