It's hard to look at the stock price performance of refiners over the past year and not think: "If only I had thrown a few thousand dollars at any one of these companies at the end of 2011." These stocks are up so high, it couldn't possibly make sense to buy any of them now, could it? Today I'll take a closer look at whether or not refiners will continue to climb in 2013.

Back to the beginning
Before we figure out what's in store for 2013, let's revisit how we got here in the first place. It all comes down to the Brent-West Texas Intermediate spread. The price of gasoline, and many other refined products, is tied to the world price of oil. That spread is part of the explanation behind high gas prices in the U.S. despite incredibly cheap domestic oil. It is also the reason why American refiners had such a banner year. They were able to buy domestic crude at low prices and sell refined products at the world price, pocketing the difference. 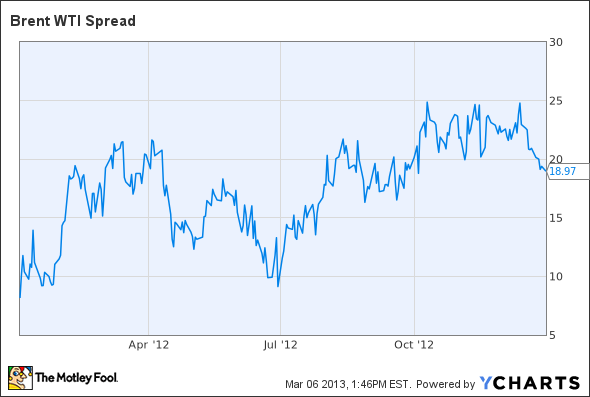 But the spread doesn't tell the whole story, because WTI is a basket of crudes, and some of them traded far below the average for much of the year. That reality allowed refiners to profit even more, provided they had access to the cheapest crudes.

Valero (NYSE:VLO) is a perfect example of how the spread works. For the fourth quarter, its operating income per barrel at its Gulf Coast refineries, (processing mostly heavy imported crude) was $6.32, compared to its midcontinent refineries (processing light domestic crude) which posted net income of $14.90 per barrel.

In order for refiners to continue to outperform in 2013, they need Brent to stay high and domestic oil to stay low, so let's take a look at how that is shaking out so far.

The spread right now
The good news right now is that the spread has persisted through the first three months of the year: 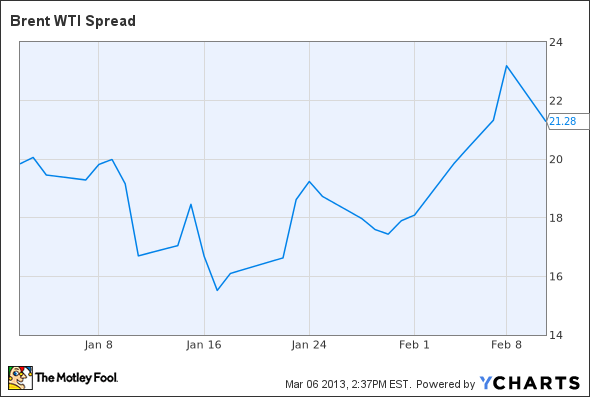 The chart above correlates nicely with the year-to-date performance of the American refiners below: 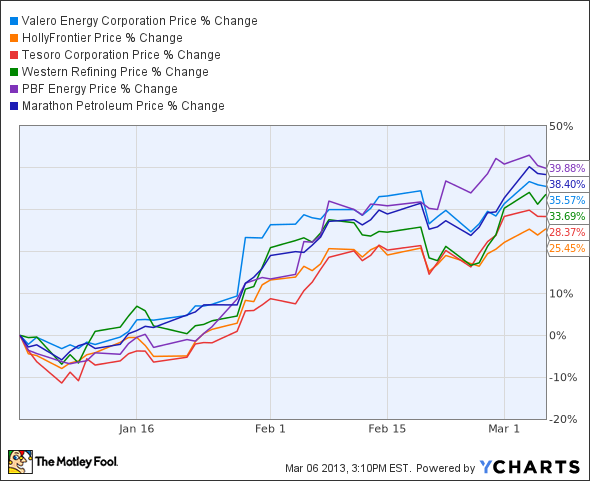 It's almost as if these stocks have been too successful; they must be super-overvalued! We've missed all the gains! Right? Wrong. The average forward P/E of the stocks above is 9.3, they are not overvalued. On top of that, there is still plenty of cheap crude to displace foreign imports, especially at refineries on the Gulf Coast.

Cheap crude today, and tomorrow
As pipeline capacity comes online, and bottlenecks at oil hubs subside, the theory is that the price of WTI will rise, eroding the delightful margins that have propelled refining stocks into the stratosphere. This is in fact already happening in the Bakken Shale, where crude is now trading at a $1.50 premium to the WTI benchmark. Much of the gain can be attributed to rail cars carting Bakken crude to the East Coast, where it is being welcomed with open arms. Refiners like PBF Energy (NYSE:PBF) will be able to displace foreign imports at the Brent price with domestic imports at the Bakken price, and the $1.50 premium to WTI is irrelevant with a cost savings like that.

It turns out, the cheapest crude in the land is in Canada. Canadian crudes have taken a beating at the hands of skyrocketing U.S. production. Unable to make their way into American pipelines full of Bakken crude, Canadian oil spent last year standing in line, losing value. Consider that the price of Western Canada Select is trading at about a $25 discount to WTI, which translates to about a $45 discount to Brent. Even if that discount erodes as Canadian crude hops on a train to the Gulf Coast, it is highly unlikely that it all $45 of discount will evaporate in less than one year.

In fact, refiners are increasingly willing to go to great lengths to get Canadian crude to its refineries. For example, Tesoro (NYSE:ANDV) is contemplating putting it on barges, floating it down to the Pacific Northwest coast, and then shipping it via rail to its refineries in California -- because it is still cheaper to do all that than import oil from anywhere else in the world.

One thing to remember
Despite what seems like a great 2013 outlook for the refining industry, it is important to remember that oil is an extremely volatile commodity, and prices can rise or plummet at the drop of a hat. Anything from extreme weather events, to geopolitical risk, to infrastructure issues can have a significant effect on the price of oil in any one region, with effects playing out across the globe. Refining margins are governed by complicated relationships across several markets, and investors need to keep that in mind before buying in.

Foolish takeaway
2013 will mark the beginning of a split in refining stories. We will finally see life on the East Coast as PBF Energy begins to run Bakken Crude. We will see cheap Canadian barrels finally make their way to the Gulf Coast in meaningful numbers, displacing heavier foreign crudes and benefiting refiners in that region like Valero and Phillips 66 (NYSE:PSX). While American demand for refined products, including gasoline, is expected to remain flat this year, it really doesn't matter to our export experts, Valero, Marathon Petroleum, and Tesoro, who can profit from global demand. Right now I agree with these refining CEOs: There is still an upside.