America International Group (NYSE:AIG) has plenty of reasons to celebrate on Wall Street these days -- from dethroning Apple as the hedge fund favorite, to big names like Bruce Berkowitz singing its praises. But even with the gaining support from the street, AIG's performance during 2012 doesn't come close to that of its competitors, namely Allstate (NYSE:ALL). Let's take a look at some of the biggest components to the insurers' performance, whether the money managers got it wrong, and what it all means going forward.

A quick look back
Over the past 12 months, AIG's stock as appreciated by 30.6%, but this doesn't come close to the majority of its rivals:

While stock performance is (of course) a very important aspect of an investment, it should not be the only factor used to determine the quality of an investment. If we look at some additional factors for AIG and Allstate, we'll get a better sense of how the two insurers operate and if the stock changes are justified.

New business
The main revenue generator for any insurance company is its premiums. Without continued growth of its premium base, an insurer will have a harder time maintaining its market share, its investment capital, and its pooled capital to pay out claims. Over the past five years, AIG experienced a huge drop in premiums because of its bailout, but as confidence in the company returned, so did the new premiums. 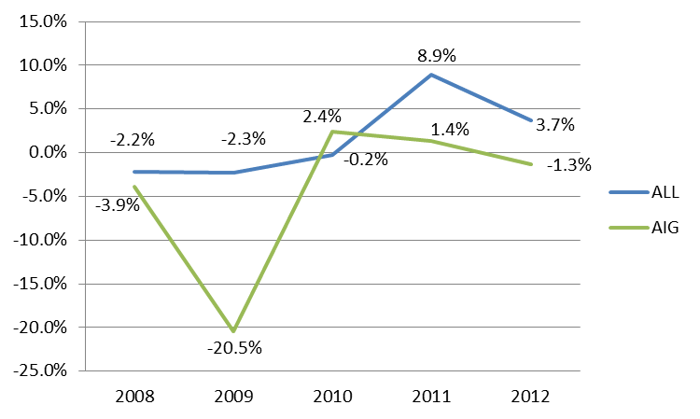 During the same period, Allstate had a slight decrease in new premiums, but it has regained some ground in the last two years. Despite the huge drop in 2009, AIG has really focused on boosting its premium underwriting and is now operating at the same level as it was in 2009 -- with plenty of room to grow. AIG has also made up for some of its lost business by increasing its rates by 6%; Allstate has also increased rates, but only by 3% in its largest operating segment -- standard personal auto.

Investing for a living
The second driver of an insurer's profitability is the income it makes by investing its pooled-premiums capital. The return a company makes on its investments is very important if it has had a decrease in new business, declining rates, and increased claims pay-outs. As we saw in a comparison between AIG and Berkshire Hathaway, even the great names in investing can lose some ground. AIG tied with Berkshire's 4.7% return on investment for 2012, and beat Allstate's 4.1%. 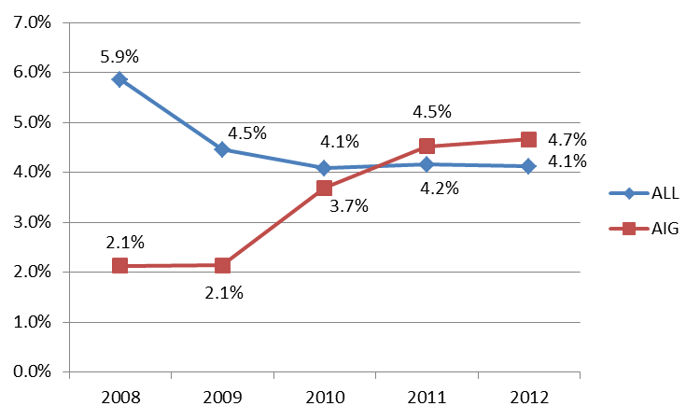 Allstate's five-year results are following the same downward trajectory as Berkshire, while AIG has had a steady increase in returns since 2009. The federal oversight of AIG's operations may be a huge part of why the company is producing improved results while others are steadily declining -- with the oversight came a huge overhaul of the company's investment strategy.

And then there was Sandy...
2012's performance for either insurer cannot be covered without touching on Hurricane Sandy's impact. AIG reported a $2 billion dollar hit from the storm, which reduced its earnings by over 300%. In contrast, Allstate's earnings were only cut by 45% and Traveler's by 52% due to the storm-related claims from Sandy. And while the differences may seem questionable, consider the following: Even though Allstate has a larger market share of the property and casualty market than AIG (5.12% vs. 4.53%), during the past five years, the good hands of Allstate have been strategically reducing its exposure to the Eastern Seaboard. With as many as 16 states with restrictions on new business or no new available coverage for homeowners, Allstate significantly cut any claims that it would have to have paid after Sandy hit the coast.

So while you may have flinched at AIG's fourth-quarter loss initially, keep in mind that the impact of one catastrophic event is not spread across multiple financial periods and cannot be directly compared to a competitor's results.

Are they nutty?
So, most of what we've covered so far may not look that great for Wall Street's pick: reduced premiums growth, lagging stock performance, and increased claims from events. But there is one significant factor that explains why so many money managers are climbing on the AIG bandwagon: book value. AIG has been trading at a discount to its book value per share since 2009. With many investors still wary of the company because of its near-collapse back then, the uncertainty keeps the company's stock unrealistically low.

As the table above illustrates, all of AIG's competitors trade at a premium to their book values, reducing any value play opportunities for investors. Since 2008, AIG's book value has appreciated by 238% while its stock price has only risen 7.4% -- this is precisely why Bruce Berkowitz and others are betting so heavily on AIG. Since the company continues to add value to its books and the uncertainty of the company's outlook will eventually lift, an incredible opportunity exists where investors can ride the stock as it rises to meet the underlying value of the company.

Golden opportunity
So while Allstate may continue to outpace AIG in the market, the latter may provide a better option for investors willing to stomach its ups and downs before Mr. Market bestows a more accurate valuation upon it.