That's hardly the most shocking statistic of the obesity epidemic, America's most serious ongoing crisis. Much has been made about the health implications of being overweight: Between increased risks of diabetes to hypertension and other ailments, obesity brings a whole host of unwanted factors to sufferers. However, the worst consequence of this growing challenge isn't the health dilemma; it's the economic predicament sparked by rising obesity rates.

With health care costs already on the rise as America ages, the country's growing waistlines will present one of the future's most dire economic challenges -- unless Americans get a handle on stopping the obesity outbreak today.

How obesity will hurt average Americans
35.7% of Americans were obese as of 2010, according to the CDC. The last two decades have seen a dramatic rise in its incidence, and the costs to overweight individuals have skyrocketed.

Translate that to the waning fortunes of the average American's wallet, and it's easy to see how individuals are suffering financially under the weight of obesity. Rising costs of health insurance aren't helping: The health care reform laws of 2010 allow employers to charge obese employees up to 30% or higher more for insurance if said employees opt out of wellness programs. However, the costs of health care reform won't impact the overweight alone.

Health insurers can't turn away customers with pre-existing conditions any more, and insurance premiums could be ready to skyrocket. The CEO of Aetna (NYSE:AET), the third-largest health insurer in the U.S., predicted that unsubsidized premiums could rise between 20% to 50% on average under Obamacare. Add up the rising health care costs of obesity onto what insurers will have to pay out, and now everyone's hurting. Pooled insurance may actually help obese customers manage costs, while hindering healthy and normal-weight individuals who will pay more to subsidize the group.

This all comes as more and more Americans struggle to deal with stagnant wages and high unemployment. Obesity alone has contributed to those factors: Studies show  correlation between chronic obesity and unemployment.

Rising health care costs due to obesity won't just cripple individuals' financial flexibility in coming years; they will deliver a crushing blow to the U.S. economy and businesses in the long term.

What the crisis means to the economy
Here's another statistic indicative of the problem the country's facing: Obesity-related health care spending is estimated to cost up to $190 billion per year; or more than 20% of total U.S. health care costs. If nothing's done to stop the epidemic now, chalk up an additional $50 billion or more on top of that total by 2030.

Obesity's rising costs are not what the U.S. economy needs as the government attempts to put a lid on exploding health care expenditures. The U.S. spent more than $8,000 per person on health care in 2012, or more than 17% of GDP -- more than 2.5 times the OECD average for national health care spending per person, a trend that fits as the U.S. has the highest obesity rate of any OECD nation. 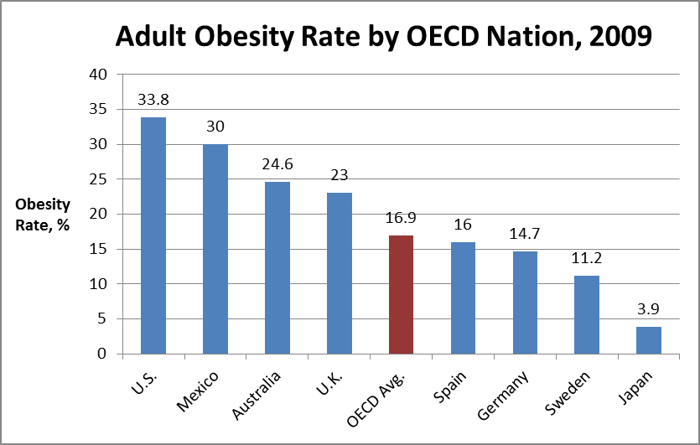 That's money that can't be spent on other vital areas of the economy, such as education, transportation, or even budget balancing -- critical necessities the nation will have to address in coming years. If health care spending continues to grow, however, those will have to be put on the backburner. And grow it has: While the rate of health care spending growth has fallen by around 50% from 2003 to 2012, growth still outpaces overall economic growth. The fall may only be temporary, as obesity -- along with the aging of the Baby Boomers -- strains the health care system.

Speaking of transportation, that too will take a critical hit from obesity's rise. Studies estimate that increased passenger weight contributed to an extra $275 million in airline fuel costs between 1990 and 2000 alone. Airlines can't afford that in today's perilous industry climate; Southwest Airlines (NYSE:LUV), for instance, can charge obese passengers for an extra seat. Yet that may not be enough for Southwest and other carriers if obesity and high fuel costs continue to weigh on their bottom lines; Southwest only manages a 2.5% profit margin, hardly allowing much breathing room.

Businesses will see even more costs due to obesity if rates keep climbing. Studies have shown a correlation between workplace absenteeism and obesity, and more overweight Americans will hamper firms' productivity. Estimates peg absenteeism-related losses for American businesses at up to $6 billion or more per year, according to data from a Duke University study led by Eric Finkelstein.

Signs of hope in the crisis
While many businesses -- and the economy at large -- will be hurt by the unabated rise of obesity, some stand to gain.

Expect pharmaceutical firms entrenched in the diabetes market to thrive as well. Obesity-related diabetes has surged across the U.S., with the CDC estimating that 8.3% of the population -- or more than 25 million people -- suffering from the disease in 2010. Diabetes alone inflicted $174 billion in total estimated costs in 2007, and firms have profited off the disease's rise: Merck's (NYSE:MRK) Januvia and Janumet family of diabetes medications pulled in more than $5.7 billion in sales in 2012. Competitors like Johnson & Johnson are pushing into the diabetes market as well, keen to make a buck off America's growing problem.

Companies will capitalize regardless of what happens, but it's not too late for America to beat back the obesity epidemic before it capsizes the economy. A 5% reduction in BMI in every U.S. state could reduce health care spending by 7% or more, freeing up billions of dollars for the many needs of the future. Smaller waistlines would mean less fuel expenditure for airlines, cars, and other means of transportation, cutting down on both costs and emissions.

How can America start fighting back against obesity? Media campaigns always help, and the "Let's Move" campaign from First Lady Michelle Obama has sparked public awareness about the problem. Still, more is needed, and the answer could come from how the country pushed back against the health hazards of smoking. Media campaigns, advertising regulations, and taxation helped drive back tobacco's toll, all while mostly avoiding dreaded public health-influenced bans that can often hurt as much or more than they help -- as New York's ban on large soft drinks (and going way back in time, Prohibition) has shown.

Whether it's by taxing high-calorie or high-fat foods or incentivizing fitness and lower body fat percentage rates through ongoing health care reform actions, more impacting action is needed to confront the challenges of obesity. If nothing is done to combat this epidemic, America's greatest crisis will only grow larger -- threatening the financial security and freedom of individual Americans, businesses, and the future of the economy as a whole.

It's time for America to step up and drive back obesity's costly advance. The well-being of the future demands nothing less.