In a recent interview, Pimco CEO and co-CIO Mohamed El-Erian said the Federal Reserve's ultimate exit from its current course of bond buying would be "one of the most challenging issues facing any central bank." Over the past several years and indefinitely into the future, the Fed has amassed an enormous balance sheet's worth of bonds that have allowed it to continue pumping the current $85 billion per month into the economy. While there are no signs that policy is about to change, when it does, the impact will be significant. Furthermore, when the central bank is ready to reverse that flow and start unwinding some of these purchases, the impact is hard to fathom.

Over an extended period, gold, as represented here by the SPDR Gold Trust (NYSEMKT:GLD), has been in a fairly stable uptrend. The Fed has been a direct impediment to the continuation of this trend, but keeping "risky" assets on the wanted path has left the entire economy overexposed. There is a fair argument that it's premature to establish a gold position in preparation for the "big unwind," when it comes, it's hard to imagine that gold will go anywhere but straight up.

More from El-Erian
As a basis for discussing the current state of the market, El-Erian explained that he accepts that there are three conditions that must be understood:

By understanding that these conditions are present in the market, you at least have a realistic chance of understanding the phenomena being observed. The Fed has maintained artificially low rates that have created a shift in investor behavior -- the capital flowing into stocks, and helping to drive various indexes higher, is coming from cash and the money markets, not fixed-income securities.

El-Erian doesn't see the Fed's policy changing in the immediate term but recognizes the complexities that will be created when that day comes. "Unlike the past, we are much more structurally impaired as an economy," he says. "We can walk; we cannot run yet. If we take away the stimulus, it's not going to be quite the same." The market and the economy have come to rely on the stimulus dollars so much that when that support is removed, the result will probably be severe. It's times like these that the optimists begin to discuss a "soft landing." Staying vigilant and protected is the best course of action.

How will gold react?
While the economy is in somewhat uncharted territory, you can begin to trace the likely results of the removal of the stimulus from this artificially created rally. There's a growing consensus among economists that while inflation has apparently been averted for the time being, it's firmly on the horizon. In his recent testimony before Congress, Chairman Ben Bernanke was quick to point to low inflation statistics, but he offered little in the way of an exit strategy, even when pushed.

When inflation arises, there will be a shift toward precious metals and other stores of wealth, including commodities in general. This shift will not only drive gold prices higher as a standalone event, but the sector rotation out of risk assets -- specifically stocks -- will also serve as an additional catalyst for gold. With the Fed -- in our hypothetical -- no longer blindly supporting stocks, an accelerating shift will occur into safe-haven assets. This will serve as a further catalyst to drive gold prices rapidly higher.

Please note that this isn't meant as a fearmongering gold play; the timing of such a shift is very difficult to predict, and the Fed may be able to find a way to unwind the overleveraged balance sheet with a modicum of order. But the risks to the market are there, and the safety that gold offers shouldn't be overlooked. It's not unlikely that a significant part of this move may occur without a lot of fanfare. Maintaining an allocation to gold, particularly given the recent declines, is a prudent way to maintain some balance in your portfolio.

How to play gold
Even though gold miners such as Barrick Gold (NYSE:GOLD) and Newmont Mining (NYSE:NEM) have significantly underperformed gold as a commodity for some time (see the following chart), there are reasons to remain skeptical of the miners. When Barrick reported its most recent quarterly results, rising cost and environmental concerns were a highlight of the report; Newmont faced the same pressures and will continue to for some time. On a broader scale, the recessionary pressures that we're all ignoring from Washington are likely to punish the miners more severely than the commodity or ETF. Given the interplay between so many current pressures, GLD continues to look very attractive as a vehicle for gold. 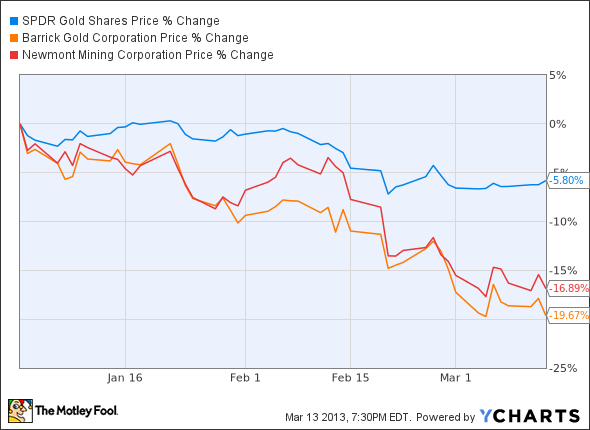