Last week's release from the Federal Reserve from part one of its Comprehensive Capital Analysis and Review (aka, stress tests) was a big day for the nation's banks. But tomorrow may be even bigger for bank investors. Most are anticipating signs of increased dividends or share buybacks, but Morgan Stanley (NYSE:MS) investors may be waiting a bit longer.

A quick recap
Morgan Stanley's results last week weren't bad, but also not the greatest. Though the bank had an admirable 13.9% Tier 1 common ratio, the Fed's stressed scenario reduced the ratio by a huge 8.2%. Because Morgan Stanley and its compatriot Goldman Sachs (NYSE:GS) operations are vastly different from the large depository institutions with trading arms, like Bank of America and JPMorgan Chase, the Fed's stress test produced harsher effects for the investment banks.

But despite the larger effects, Morgan Stanley passed the first round of tests, and may have some wiggle room in the second round. 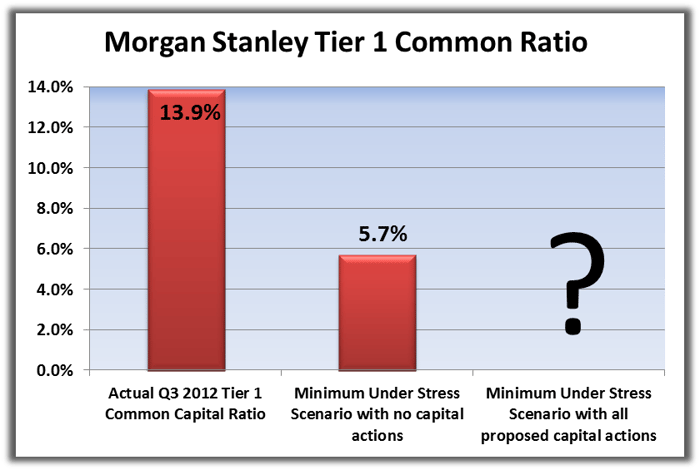 Should Morgan Stanley ask for a dividend increase or share buyback?
In short, no. While the bank does have some room before it's Tier 1 common capital ratio reaches the Fed's 5% minimum, any dividend increase or share buyback would not be substantial enough to make a big difference for its investors. With its current payout of 0.2%, Morgan Stanley will have no problem getting its current dividend approved by the Fed, and though that may not be appreciated by investors now, it has another opportunity to use its capital for another purpose that can potentially add much more value.

Taking a cue from last year's capital plan, Morgan Stanley should avoid increasing its dividend or initiating share buyback programs in favor of escalating its acquisition of Morgan Stanley Smith Barney. The joint venture with Citigroup (NYSE:C) has already bolstered Morgan Stanley's operations with increased exposure to wealth management. The bank currently has an agreement with Citi that it will purchase the remaining 35% stake in Smith Barney by 2015.

Not only has the purchase of Smith Barney provided increased revenue to Morgan Stanley, but the acquisition price is heavily favoring the purchaser -- giving ample opportunity for MS to realize increased gains from the purchase.

If not now, when?
Once Morgan Stanley has some more breathing room under stress test conditions, and has made substantial progress on purchasing the remainder of Smith Barney, it should request authorization to increase its dividend and/or share buybacks. The bank would be serving its shareholder's long-term interests by putting off capital distributions in favor of the acquisition that places it firmly in the wealth management sphere -- a direction Morgan Stanley is favoring.

But once Smith Barney is largely owned by Morgan Stanley, and integrated into the bank's operations, its investors deserve a capital boost from the paltry level of distributions they receive now.