Although Minnesota hasn't begun to thaw from its blistering cold winter, its native-son, U.S. Bancorp (NYSE:USB), is giving its shareholders something to make them feel a little warmer inside.

Thursday evening, the Federal Reserve released the second part of the annual banking stress test results, which examined the largest U.S. banks' ability to make capital distributions and maintain certain capital levels during an economic downturn. While it stood out as one of the strongest banks during last week's stress tests, US Bancorp shareholders received a cherry-on-top after the Fed did not object to the company's proposal to raise its dividend 18%, and increase share buybacks. These Comprehensive Capital Analysis and Review (CCAR) results highlight the strength and sustainability of U.S. Bancorp's balance sheet and profit engine. How it will impact its capital ratios
In addition to posting a higher actual Tier 1 common ratio in Q3 in 2012 compared to 2011, U.S. Bancorp posted an impressive minimum Tier 1 common ratio of 8.3% under the severely adverse scenario. That hypothetical 8.3% was determined with the assumption that the bank will continue its $0.195 quarterly dividend through the nine-quarter stress period. Even with its newly approved dividend, the CCAR results revealed that U.S. Bancorp's Tier 1 common ratio would only fall to 6.6%. Regardless of some investors clamoring about the ease of the tests this year, it is hard to deny the improvements U.S. Bancorp has made to its balance sheet and business prospects. 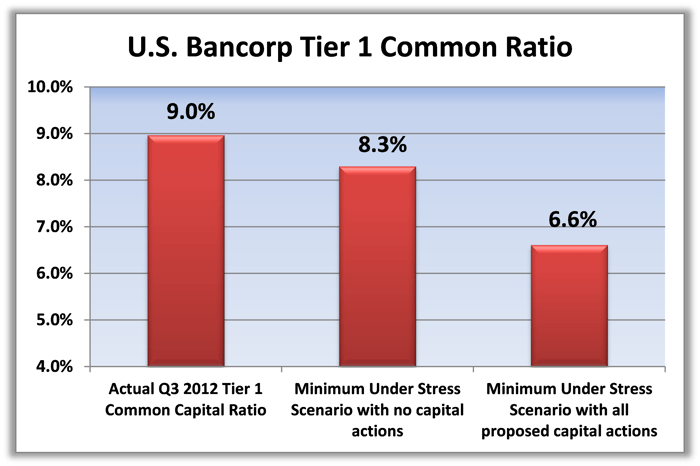 No tossing and turning
Last year, U.S. Bancorp asked and received approval for a 56% increase in quarterly dividend payment, and a new share repurchase program. CEO Richard Davis and his management team have proven that their focus on traditional banking is tremendously shareholder-friendly. Given its high-quality balance sheet, and what's now becoming a trend in returning capital to investors, USB shareholders will surely sleep peacefully tonight.

Here's How Much U.S. Bancorp Is Raising its Dividend @themotleyfool #stocks $USB Next Article
Current