Initial jobless claims fell 2.9% to a seasonally adjusted 332,000 for the week ending March 9, according to a Labor Department report released today. After the previous week's revised 1.4% drop, this latest jobs report marks the third straight week of declines in initial claims. Market analysts had forecast a 2.9% increase.

The real cause for celebration comes from this week's longer-term look. As declines remain consistent, the four-week moving average crept down to 346,750 to reach its lowest level of the recovery, according to The Wall Street Journal. The AP reports that the four-week average notched its lowest level since the week of  March 8, 2008.

Both the most recent week's number and the moving average clocked in solidly below 400,000, a cutoff point that economists consider a sign of an improving labor market. This latest news also comes one week after the Labor Department announced an unemployment rate drop to 7.7% for February. 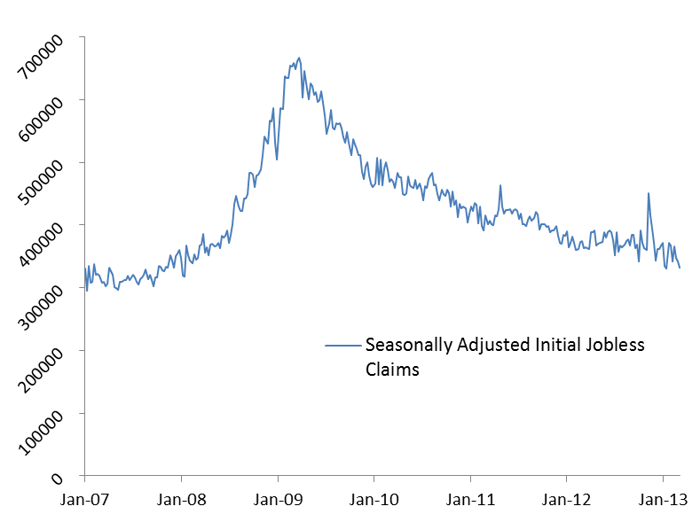 On a state-by-state basis, Massachusetts and North Carolina led the drop in initial claims for the week ended March 2 (most recent available data). Both states cited fewer layoffs in the transportation industry as one of the primary reasons for their respective 4,190- and 1,150-claim dips. After California's initial claims fell a whopping 40,350 the previous week, the Golden State in the most recent jobs report registered the largest week-to-week increase in initial claims (11,720), due primarily to service sector layoffs.