The CPI which rose 0.7% in February, just slightly above analyst expectations. The rise owed mainly to energy prices, which rose 5.4% in February. Core CPI, which excludes energy and food, rose only 0.2% in February. Many economists and investors are worried the Federal Reserve's QE3 will stoke inflation. While that hasn't been the case yet, it's something to keep in mind as the Fed does everything it can to make that happen. 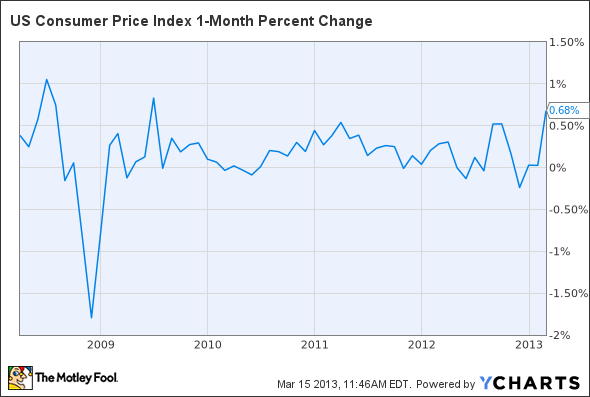 The final economic release was the University of Michigan's Consumer Sentiment Index, which unexpectedly took a big drop, falling to its lowest level since December 2011. The Dow started the day down but dropped noticeably after the survey was released. Analysts had expected consumer sentiment to remain largely unchanged at 78. Consumers' opinions of the state of the economy sank as energy prices rose, the payroll tax increase ate into consumers' wallets, and Congress let sequestration take effect. While this is only a survey of consumers' opinions, it's generally seen as correlated with consumer spending. If consumers stop spending, the economy will definitely slow, as consumer spending makes up 70% of the U.S. economy. That said, the survey can be extremely volatile, so it remains to be seen whether this is a blip or a new trend. Today's Dow leader
Today's Dow leader is Bank of America (NYSE:BAC), up 3.7% to $12.56. Yesterday, the Federal Reserve announced the results of its stress tests of U.S. banks. Bank of America had requested authorization of a $5 billion stock buyback and a $5.5 billion preferred-stock buyback, which the Federal Reserve approved. Meanwhile, Goldman Sachs and Dow bank JPMorgan Chase were both asked to resubmit capital plans by the end of the third quarter, while BB&T's capital plan was rejected. If you want to learn more, you can read Fool analyst John Maxfield's take on Bank of America's stress test results. The bottom line is that the Federal Reserve's acceptance of the plan shows that Bank of America is strengthening, and soon the bank will be repurchasing shares at below book value.