The release of the Fed's second Comprehensive Capital Analysis and Review test was a positive note for investment bank Morgan Stanley (NYSE:MS). Though the bank had a small margin to work with following the initial round of stress tests, it received no objections to its 2013 capital plan. Some of Morgan Stanley's closest rivals did not receive the same confidence, so let's take a look at MS's results, how it stacked up, and where it goes from here.

The results
As noted in the preview to this week's results, Morgan Stanley had one of the lower Tier 1 common capital ratios under the Fed's stressed scenarios, but its results had been expected since it does not operate the same large depository arms as rival JPMorgan Chase (NYSE:JPM) does. Both Morgan and Goldman Sachs (NYSE:GS) were largely more affected by the negative scenarios designed by the Fed, but both passed the initial round.

On to round two. Morgan Stanley submitted its 2013 capital plan, which closely mirrored its 2012 plan and included the cash acquisition of Citigroup's (NYSE:C) remaining 35% stake in Smith Barney. The $4.7 billion acquisition is still subject to further regulatory approval, but the bank's second round test results will not stand in its way. 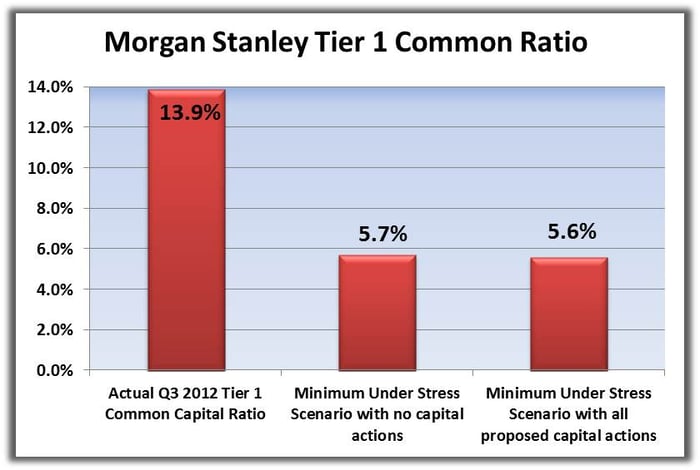 Even with the potential cash outflow of $4.7 billion, Morgan Stanley's Tier 1 common ratio was only reduced by 0.1% under the Fed's stressed scenarios. This is a great showing for Morgan Stanely, especially after both Goldman and JPM were required to submit further plans to correct weaknesses in their capital plans that were "significant enough to require immediate action." So far in after-hours trading, Morgan Stanley is up 2%.

Moving forward
So, with no objections to its capital plans, Morgan Stanley can get to work. 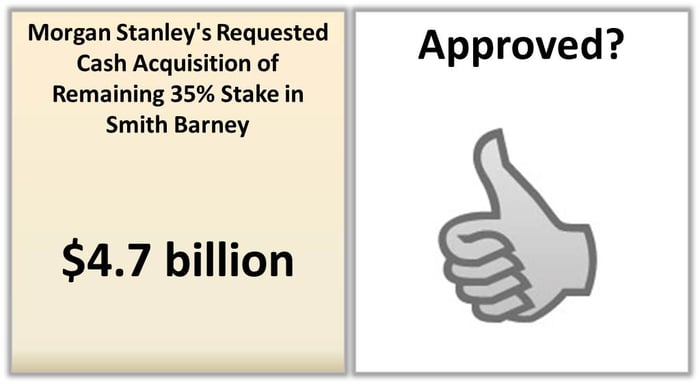 The next step toward its full ownership of Smith Barney could initiate as soon as next month, propelling Morgan Stanley further along its path to becoming the top-notch wealth manager it has aimed to be. With the addition of the remaining Smith Barney ownership, Morgan Stanley's revenues will be bolstered, allowing the bank to provide valuable capital to its shareholders at a later date. Though investors are not getting an immediate payout, some may be disappointed -- but Morgan Stanley's plan is truly aimed at adding great value for long-term investors looking for growth.

The other side of investment banking
As mentioned above, some investment-heavy banks weren't as happy with the Fed's results as Morgan Stanley. With weaknesses highlighted in its capital plan, how with Goldman Sachs fare going forward?