Just last month, Google (NASDAQ:GOOGL) launched its "enhanced campaigns" to meld desktop search ads with mobile search ads, removing the option for advertisers to opt out of using mobile ads in their campaign. It was a bold move by the company and showed that Google is moving its advertisers quickly into the mobile world, where competition is heating up.

Right now, Google enjoys about 95% of global mobile searches. In the U.S. alone, the market for mobile search advertising is expected to hit $3.36 billion this year, and eMarketer expects Google to snag 92.4% share of that. Google's new, enhanced campaign strategy will help the company to acquire that market share by moving advertisers away from desktop-only campaigns and essentially forcing them to create ads around content rather than a specific platform . 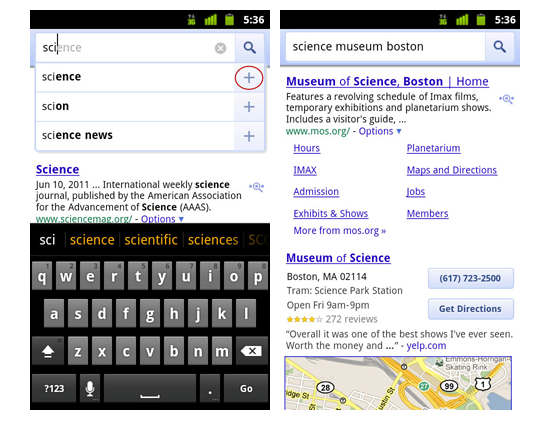 Google's move comes at a strategic time in the mobile advertising space. Desktop search is on the decline while mobile search is skyrocketing. The latter now accounts for 25% of all Internet searches, and search marketing agency Covario estimates that mobile search will reach one in every three searches by the end of this year .

Google's most vocal contender is Microsoft (NASDAQ:MSFT) and its Bing search engine. Bing is the default search engine on the Windows Phone OS, but the operating system currently takes less than 3% of smartphone market share, and in 2011 Bing only took 2% of the mobile search market. Even if Windows Phone sales took off and Bing's mobile search doubled or tripled its current percentage -- both a difficult feat -- Google would still own the market.

Searching without searching
It may not be Microsoft that Google needs to watch out for, though. Mobile search through apps is on the rise. Many apps utilize smartphone location-based features to integrate search results within apps, which bypass Google or Bing.

Apple's place in the search market is an odd one. Back in 2010, Steve Jobs said, "On the desktop search is where it's at; that's where the money is. But on a mobile device search hasn't happened. Search is not where it's at, people are not searching on a mobile device like they do on the desktop." Fast-forward three years and Apple's Siri performs many search functions for mobile users. Siri consults Google for some results, but also taps Bing, Yahoo, Wolfram Alpha, Wikipedia, and other sites for queries. Although Siri doesn't bring in any mobile search revenue for the Cupertino company, Siri could take up more mobile searches over time and eventually hurt big players such as Google.

The shift from using a search tool to searching within apps could eventually be bad news for Google but great news for companies such as Facebook (NASDAQ:FB). Facebook recently revamped its News Feed and its new Graph Search feature to include much more local search information than ever before. Changes like this aren't just for user experience; they're a way for Facebook to add value to its advertisers and open new ways to gain mobile search advertisements.

Although Facebook doesn't have its own Internet search engine in the traditional sense, Graph Search allows users to search for specific things such as music, restaurants, or pictures within Facebook, and has the ability to show sponsored ads above results for things Facebook users search for.

Sponsored ads aren't a new feature on Facebook, but Graph Search could take Facebook's mobile search ads to a new level. Graph Search results incorporate much more information and allow users to be more specific in their searching. Advertisers can then use that information to specifically target the Facebook queries that match their desired audience much more directly than before. If Facebook mobile users search within Facebook, as opposed to Google, the company could further increase its mobile advertising endeavors and begin taking a piece of the mobile search market.

Mobile search on the move
This year, mobile devices are expected to outnumber desktops and that trend isn't likely to ever reverse. Google, Microsoft, and Facebook are already focusing huge amounts of effort on mobile advertising, and mobile search will be a large part of that strategy. With Google's enormous lead, it's hard to imagine any company being able to take that away from them anytime soon. But the mobile world moves extremely fast, and if users opt for more in-app searches such as Facebook's, then the company may face increased competition.

Investors need to see Facebook continue down its most recent path of mobile developments. It has turned around its mobile advertising identity recently and if it can further tap into mobile search advertising and other ads, that trend is likely to continue. Microsoft, on the other hand, is facing an uphill battle against Google. Although Windows Phone OS share is expected to grow slightly, Google is still the search engine of choice for mobile users -- and there's nothing in sight to change that.