When a stock's share price is lower than a North Dakota thermometer in February, investors tend to give it the cold shoulder. But as fortunes change and the market warms to a stock's prospects, its price can heat up in a hurry. Unfortunately, it's hard tell that a stock is melting investors' hearts until after it's made that upward leap.

Taking the market's temperature
But using Motley Fool CAPS' proprietary ratings, aggregated from the opinions of the 180,000-member-driven investor community, can help us find previously low-rated companies that recently enjoyed a bump in investor confidence. We can see whether they're truly heating up -- or headed back to the deep freeze.

Nut grower Diamond Foods (NASDAQ:DMND.DL) is looking to put its recent ignominious past behind it, and investors are responding to the change, with even investment house BlackRock taking an 8% stake in the company. Since we're all probably familiar with the accounting shenanigans that led Diamond to its low state, let's see if the market is nutty for changing its outlook on this stock.

Caution: Contents may be hot
Although its hopes of becoming a major snack-foods company were dashed following the accounting brouhaha last year when it lost Procter & Gamble's (NYSE:PG) Pringles business to Kellogg (NYSE:K), that doesn't mean Diamond has given up on the segment. It has two popular snack-food brands in the Kettle chip and PopSmart popcorn businesses, and those two were largely responsible for keeping last quarter from becoming a complete disaster.

Snack revenues jumped 7% to $105 million last quarter and now account for 48% of revenues, up from 37% last year. Although that's predicated on the worsening situation in its nut business that saw sales tumble 30% to $115 million, Diamond remains intent on repositioning itself as a snack-foods company, particularly since it's responsible for more than two-thirds of company profits.

Last summer, Diamond attempted to speed up market-share gains by engaging in a bit of promotional activity around the Kettle brand, only to have it backfire because it undermined the chip's premium positioning. When the market researchers at Nielsen surveyed what consumers were buying in 2012, they found Kettle and Emerald sales actually declined because of it. The nut grower was forced to backpedal and reduce what it termed "inefficient discounting," which fortunately helped sales rise. 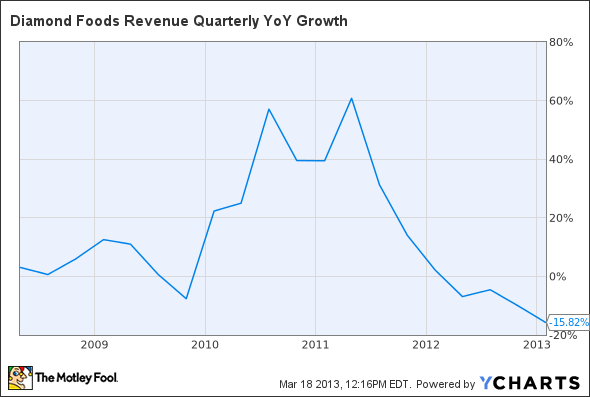 Good intentions aside, getting Diamond to be more than just a gem in the rough isn't going to be easy. Competition for limited consumer dollars is filled with a lot of sharp elbows following a period of consolidation in the industry.

It was that trend of industry consolidation that had Diamond pursuing Pringles, and it would have made the company a formidable rival. As Kellogg's recent quarterly results showed, the cereal maker is now the top snack-foods company behind PepsiCo's (NASDAQ:PEP) Frito-Lay division, and it enjoyed an 18% surge in net revenues primarily as a result of Pringles.

So while there are still growth opportunities out there, it's tempered by the knowledge that much of the big tie-ins are behind us.

The weight of the world
At more than 30 times earnings estimates, Diamond is more expensive than almost all of its rivals now. The stock is up 28% from its 52-week lows hit last November, a long way to come in such a short time. It's still getting itself back on its feet financially, and though it's turned the quarter on profitability, I think it's still constrained about how far it can rise.

There are plenty of small privately held snack-food companies out there if it still wants to pursue a growth-by-acquisition strategy, though they'll probably just add incrementally to its top and bottom lines. Instead, I think we'll see Diamond Foods become a slow-growth stock rather than be momentum player, but let me know in the comments box below if you'd be willing to nibble on this snack-food specialist.