As I noted three weeks ago, cancer statistics are both staggering and disappointing. Although cancer deaths per 100,000 people have been on the downswing since 1991 thanks to access to more effective medications and better awareness about the negative health effects of smoking, there is still a lot of research and progress yet to achieve. My focus in this 12-week series is to bring to light both the need for continued research in these fields, as well as highlight ways you can profit from the biggest current and upcoming players in each area.

Thus far, we've examined the two most oft-diagnosed cancer types: prostate cancer and breast cancer. This week we'll be shifting our focus to lung cancer -- a type of cancer with a much grimmer prognosis in terms of survival rates than prostate or breast cancer.

The skinny on lung cancer

This year, an estimated 228,190 people are going to be diagnosed with some form of lung or bronchus cancer. I wish I could say that advancements have been swift in treating this disease, but abstinence and awareness as to the effects of cigarette smoking have been front and center in helping to reduce instances of lung cancer over the past two decades. Between 2005 and 2009, the incidence of lung cancer in men has decreased by an average of 1.9% annually. For women, this trend only recently began to reverse, with diagnoses falling by just 0.3% annually between 2005 and 2009.

However, the sad reality is that five-year survival rates for lung cancer have improved from just 12% in 1975-1977 to 17% in 2002-2008, according to the American Cancer Society (link opens PDF). Lung cancer is an effective and swift killer, accounting for more deaths among men and women than any other cancer, and has left patients and physicians scrambling for solutions for the better part of 40 years. 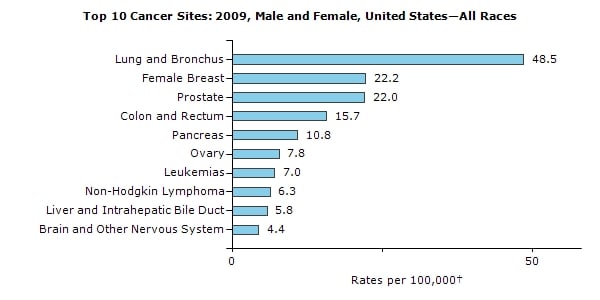 Where investment dollars are headed
Unlike prostate or breast cancer, which have growing five-year survival rates and hormonal therapies that keep the disease at bay, lung cancer has few tools that slow down the progression of the disease for a meaningful amount of time. In short, investment dollars are streaming into lung cancer research from both an early- and late-stage perspective, and physicians couldn't be happier to have so many companies focused on the next revolutionary lung cancer treatments.

The National Cancer Institute alone lists 29 drugs currently approved by the FDA to fight non-small-cell lung cancer, or NSCLC. I'll cover the most pertinent ones below. I should also note that I'm going to focus almost entirely on NSCLC treatments as opposed to small cell lung cancer, or SCLC, as SCLC has a considerably better response rate to standard chemotherapy and radiation than does NSCLC.

Unfortunately, 29 compounds simply aren't enough for us to be anywhere near knocking down this disease. The failure rate for lung cancer drug hopefuls has been maddeningly high. In December, Oncothyreon and Merck KgaA's Stimuvax failed to improve overall patient survival. In October, ArQule imploded after the independent data monitoring committee saw no chance of tivantinib meeting its survival endpoints. Just a month before that, Eli Lilly's Alimta when combined with Roche's Avastin failed to improve overall survival in a late-stage study despite demonstrating a progression-free survival improvement in the Alimta control arm. In March 2011, even Amgen and Takeda Pharmaceuticals (two huge biotech behemoths) failed to meet their clinical endpoint with motesanib in late-stage trials.The point here is that this is an incredibly difficult disease to fight off, and many of the experimental drugs currently in the pipeline won't make it to market.

What's coming down the pipeline
Following such depressing news that many of these lung cancer drugs will fail, I even admit it can be difficult to pick out a few upcoming drug hopefuls that could change the game for lung cancer sufferers. Here are three experimental drugs worth keeping your eyes on.

If you're looking for a company with a bright future and perhaps a dose of risk, I'd give that to Celgene with Abraxane. I don't feel that Abraxane's improvements in median response duration were truly eye-popping, but the simple fact that it's approved as a first-line treatment should give it an edge over many of its competitors -- not to mention that Abraxane is approved to treat way more than just NSCLC.

However, the most stable company here that looks poised to deliver demonstrable returns from a financial perspective for shareholders is Pfizer. Xalkori is perhaps the first specialized NSCLC drug that targets a mutation and delivers a markedly higher response rate than the previous standard treatment. Xalkori has been assigned a high-end peak sales estimate of $2.5 billion by analysts, which I feel could be quite achievable given its outperformance in existing studies.

Stay tuned next week when we tackle the current and upcoming therapies for the treatment of colon and rectal cancer in this Tackling Cancer series.