Last quarter, there was no sugarcoating it: Apple's (NASDAQ:AAPL) Mac shipments were surprisingly weak. Mac units came in well below anyone's best guesses, and the shortfall was primarily related to the redesigned iMacs that were being faced with supply constraints related to full display lamination. Even as the broader PC market has been rather weak lately, the Mac dramatically underperformed the overall market.

This quarter, things might be about to change, as the Mac is roaring back while the PC gets even weaker.

The Mac is back

The figures only relate to U.S. shipments. Prior to the recent reporting changes, Apple used to disclose Mac units shipped to each geographical region, with Americas and retail comprising the bulk of unit sales. 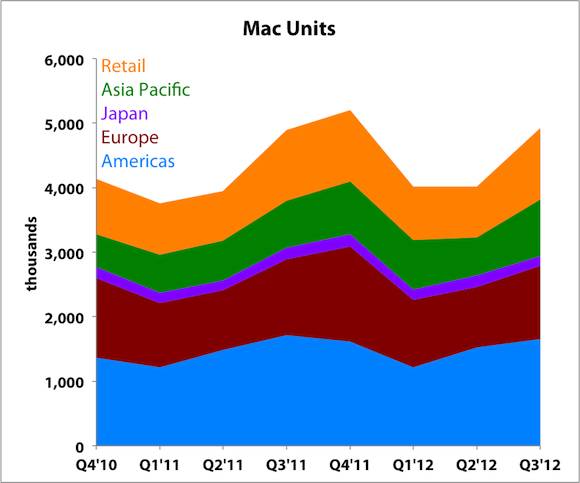 Munster is modeling for an overall 5% drop in Mac sales during the March quarter. That may not initially strike investors are "roaring back," but remember that Apple posted an underwhelming 22% decline last quarter, breaking its multi-year streak of outperforming the PC market, so a negative 5% would be quite an improvement sequentially. The analyst's estimate puts Mac units in the neighborhood of 3.8 million this quarter, following an expected seasonal decline coming off the holidays.

It's also worth mentioning that a negative 5% result this quarter would allow Apple to return to its PC-market-beating ways, since new data shows the broader PC market performing even worse than initial expectations.

The PC is slacking
IDC now believes first quarter PC shipments in China are going extremely slow, in part due to government budget cuts and anti-corruption measures that are putting a drag on sales. China represented 21% of global PC shipments last year, so any softness in that region will weight on the broader market.

The transition to Microsoft (NASDAQ:MSFT) Windows 8 has been tough on OEMs and suppliers (and Microsoft, too), and that isn't expected to ease up any time soon. IDC predicts first quarter PC units to fall by 7.7%, with any possible surprises more likely on the downside than the upside, according to its supply chain data. The drop could even touch double-digit territory in Q1, with a mid-single-digit fall next quarter. The only way that the PC market will rebound during the latter half of the year is if new designs are introduced at competitive pricing relative to tablets.

A mixed opinion
The PC pessimism echoes sentiment from Nomura Equity analyst Rick Sherlund. Last week, Sherlund said Windows 8 has been "awkward" so far and that the inherent compromises in the platform have hindered adoption. Over time, the situation should improve as Microsoft refines the operating system and OEMs deliver new form factors at competitive price points.

However, Sherlund does express optimism in the medium-term, predicting shipments to rebound in the second half of the year, which is why overall he still rates Microsoft a "buy" and has a $32 price target on the software giant.

Every little bit helps
Ultimately, Macs remain a small portion of Apple's overall business nowadays as mobile devices comprise the bulk of sales. We're talking about just 13% of trailing-12-month sales coming from Macs, compared to 72% for iPhones and iPads combined. But with fears that Apple may miss its own guidance in the current quarter, every little bit certainly helps.