Facebook is striving to become the world's best "personalized newspaper," says Zuckerberg. An ambitious goal, indeed -- but the tide's in his favor.

Our goal is to "give everyone in the world the best possible personalized newspaper we can," Facebook's (META 5.37%) CEO Mark Zuckerberg said in a March 7 press conference, when the company unveiled the new look of its timeline. His case, it turns out, is actually quite convincing. From the new timeline's ability to allow users to look at their content in different sections to the powerful algorithms that deliver you the news you care about most, Facebook is poised to change the world of news forever.

The growing power of technology platforms among news organizations
"News organizations are increasingly dependent on … powerful tech firms for the tools and platforms needed to reach their audience," notes The State of the News Media 2013, the most recent annual report on American journalism from the Pew Research Center. A news organization's success on Google (GOOGL 2.62%) and Facebook platforms in particular plays a large role in keeping these organizations on the map.

Google, for instance, extended its lead over traditional news organizations in digital advertising in 2012 by becoming both the largest display advertiser and a powerful player in the market of mobile ads as its Android operating system continued to gain worldwide smartphone market share.

Facebook has also made enormous inroads among news organizations, with 9% of major news websites' traffic coming from Facebook, up from 4% just 15 months earlier, according to Experian Hitwise. Some websites that have made more progress with mobile, like Quartz, report 30 to 40 percent of their traffic coming from social media.

Furthermore, audiences are reporting increasingly more consumption of news through social media. In 2012, 19% of Americans saw news headlines on a social network in the previous day, compared to just 9% in 2010. 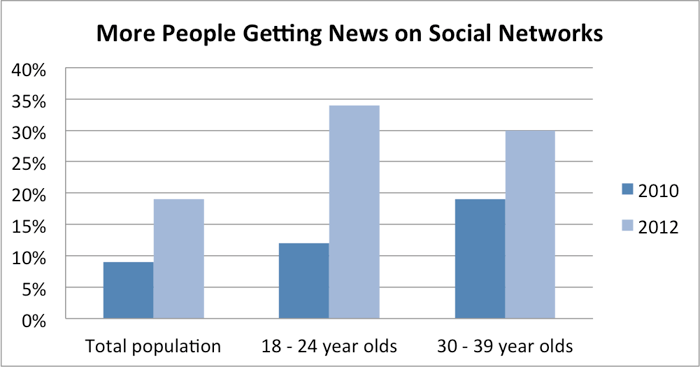 But an important point to note about these developments is that established news brands don't seem to be losing clout with their readers; the change comes from the way in which the public accesses the news.

"The U.S. audience still turns to the legacy newspapers, TV stations and cable channels they have long known," according to the Pew Research Center's data  . The medium that facilitates the consumption of this news is where the revolution is happening. This means that news organizations are racing to embrace and monetize their mobile and social platform traffic sources.

The growing usage of tablet devices, in particular, will drive this transition over the next few years. As much as 64% of tablet owners report that they get news every week from their devices, according to a joint study by the Pew Research Center and the Economist Group. Apple (AAPL -1.26%) will play a huge role in this shift -- the company moved 65.7 million iPads in 2012 alone. And research firms expect enormous fast-growing tablet market expansion ahead. ABI Research projects 2013 tablet sales to increase by 125%.

Monetizing mobile access is absolutely essential to news organizations. Not only is the number of individuals using mobile devices for news increasing, but also, the joint study by the Pew Research Center and the Economist Group found, that many tablet users actually consume more news than they did before owning a tablet:

The updated news feed allows users to select from different categories they would like to view when browsing their news feed. Initially, the categories include friends, pages, specific lists (like "close friends"), photos, or content from people they've subscribed to. But a Facebook spokesperson told AllFacebook that, in the future, the categories may expand to include more options.

Just like people might pick up The Wall Street Journal and turn to the business section, they can now look at the news from the Pages they've liked, or specifically look at photos. Facebook hopes categorization will make its platform more immersive.

What we’re trying to do is give everyone in the world the best personalized newspaper we can. We believe that the best personalized newspaper should have a broad diversity of content. It should have high-quality public content from world-renowned sources, and it should also have socially and locally relevant updates from family, friends, and the people around you. It should also enable you to drill into any topic that you want to discuss.

Facebook's importance in advertising
If the new timeline does make Facebook a more effective personalized newspaper, its growing importance in the ad space could pick up tremendous momentum among news organizations. It's tough to estimate the exact effect the redesign will have on ad metrics , but it will undoubtedly be positive. Becoming the world's best personalized newspaper is an ambitious goal, indeed. But the tide is in Zuckerberg's favor.