When Chesapeake Energy (OTC:CHKA.Q) sold part of its stake in the Mississippi Lime for well below what it was believed to be worth, it was taken as a sign to the market that maybe the play wasn’t panning out. That’s what happens when you previously tell investors the land was worth three times the amount you ended up getting in the joint venture sale. Given the latest news out of the Mississippi Lime it would appear that Chesapeake is wrong about the play, again.

As part of a broad strategy to secure domestically produced crude oil, Phillips 66 (NYSE:PSX) signed an agreement with Magellan Midstream Partners (NYSE:MMP) to access the oil coming out of the Mississippi Lime. While a bulk of the company's recent deals involved crude oil being shipped by rail, this deal will feature crude oil being shipped by pipeline. Once the Magellan pipeline project is complete early next year, 20,000 barrels of oil per day will be sent to Phillips 66 Ponca City refinery in Oklahoma.

In addition to the oil from Magellan’s pipeline, Phillips 66 is investing in its own transportation infrastructure to secure an another 40,000 barrels of Mississippian oil per day for the same refinery. As you can see in the map, Ponca City is located very close to the Mississippi Lime, which is ideal for keeping transportation costs down. 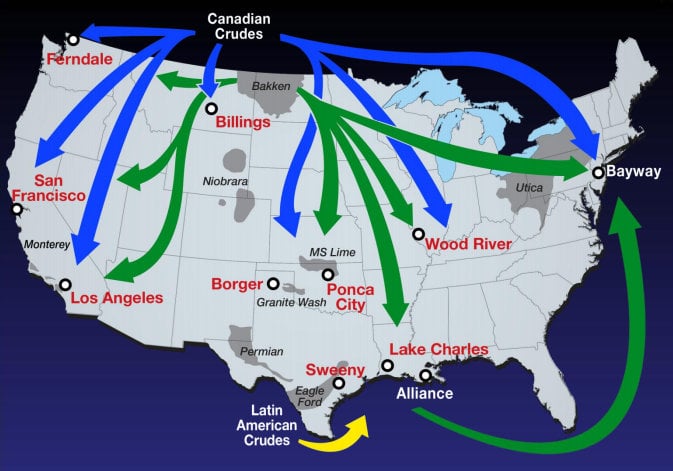 While securing cheaper crude is great for the bottom line at Phillips 66, it’s also great news for SandRidge Energy (NYSE: SD). Investors have punished the company’s shares over the past few years as it’s made several debt-fueled bets that went bad. Its latest foray is an all-in investment on its Mississippi Lime acreage, so a Phillips 66 stamp of approval on the play is nice to see.

SandRidge, which is by far the biggest operator in the play, has nearly 700 wells drilled and more than 30 rigs currently running. For some context, Chesapeake has drilled the second-largest number of wells, but it’s less than half the amount that SandRidge has. Chesapeake and its new Chinese partner are unlikely to catch up anytime soon with just eight rigs running; in fact, the Devon Energy (NYSE:DVN) has the second-highest rig count at 10 rigs. Both Devon and Chesapeake have focused their drilling dollars elsewhere, while SandRidge has doubled down on the Mississippian.

SandRidge has just under 2 million net acres in the Mississippian and sees the potential for nearly 11,000 future drilling locations. According to the company, that equates to an 18-year drilling inventory. That's big-time growth, and the movement of Phillips 66 to secure some of the play's production would seem to indicate that it sees a lot of value to its business in the play being developed. SandRidge could be on the cusp of something big, especially if it can shed its reputation of a poor performer.