Across the board, today's economic releases were positive for the economy. Markit's flash purchasing managers' index showed that purchasing managers believe economic activity is growing slightly faster in March than in February. The FHFA home price index showed that home prices increased by a seasonally adjusted 0.6% in January. Year over year, home prices were up 6.5%. Meanwhile, the Conference Board's leading economic index grew 0.5% in February, showing slowly increasing economic activity. 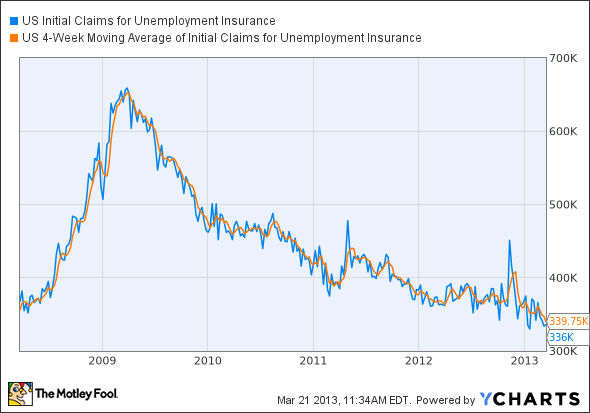 The other report was from the National Association of Realtors, which showed that existing-home sales rose in February to a seasonally adjusted annual rate of 4.98 million, a three-year high. Last year the housing market steadily improved throughout the year, contributing to the growth of the economy. 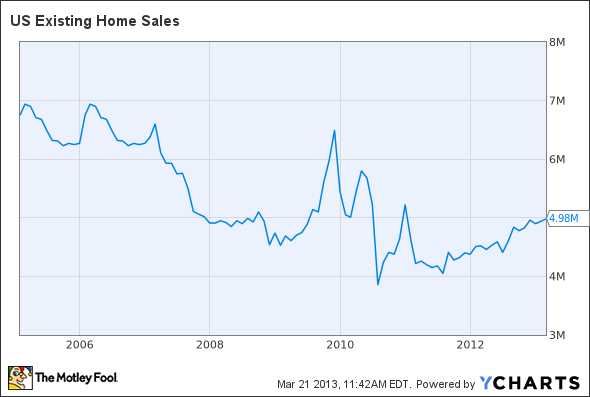 The National Association of Realtors' chief economist, Lawrence Yun, had this to say:

Job growth in the improving economy and pent-up demand are causing both home sales and rental leasing to rise. Though home prices are rising much faster than rents, historically low mortgage rates are still making home purchases affordable. The only headwinds are limited housing inventory, which varies greatly around the country, and credit conditions that remain too restrictive.

While all of today's economic reports showed a growing economy, investors should note that all of these measures are backward-looking and don't account for the future effects of the sequester, which takes effect in April and will dampen growth.

Today's Dow leaders
Today’s Dow leader is Coca-Cola (NYSE:KO), up 0.8%. Today the company announced that it will lay off 750 people -- about 1% of its North American employees. Earlier in the week Coca-Cola made news when it announced that internal studies concluded that social media does not have a measurable impact on sales. It's not that Coke needs any real help in the sales department: Sales have grown at a 10.7% compound annual growth rate for the past five years.

Coke has a long history of returning cash to shareholders as it grows. The company is a Dividend Aristocrat, which means it has increased its dividend every year for the past 25 years. Coke actually doubles the requirement to be a Dividend Aristocrat: This year's boost is the company's 51st consecutive annual dividend increase. In February, Coke announced that it was increasing its dividend by 10% to $0.28 per quarter for a forward yield of 2.8%.

Second for the day is Wal-Mart (NYSE:WMT) up 0.3%. As the economy improves, in particular the jobs situation, Wal-Mart's results should improve as well. However, Wal-Mart faces some headwinds: The payroll tax increase, rising gas prices, and slower-than-expected tax refunds are expected to hurt sales. Not everyone is worried, though. Fool analyst Matt Koppenheffer recently talked about why Wal-Mart is one of his top two holdings; you can hear him explain here.

Third for the day is Chevron (NYSE:CVX), up a mere 0.2% on no real news and defying the nearly 1% drop in the price of oil. Yesterday Chevron announced that it is forming the Center for Sustainable Shale Development to set standards for hydraulic fracturing around Pennsylvania, Ohio, and West Virginia. The coalition includes Shell, EQT, Consol Energy, the Environmental Defense Fund, the Clean Air Task Force, the Heinz Endowments, and the Pennsylvania Environmental Council. Winning over the public, which is concerned about potential damage to the water supply, is crucial for the oil and gas industry, and efforts to make fracking safer go a long way toward doing that.