BlackBerry (NYSE:BB) won't make another tablet to replace the ill-fated Playbook anytime soon. The company is thinking about how to make a tablet that stands apart from the pack. "How can we take this to the next stage and not just be another tablet, or another design of a tablet?," CEO Thorsten Heins said at the Australian BlackBerry Z10 launch this week. "How can we really add value?"

Okay, cool. But did he tell the rest of his company? I'm asking, because Thorsten's director of product management just told a very different story. 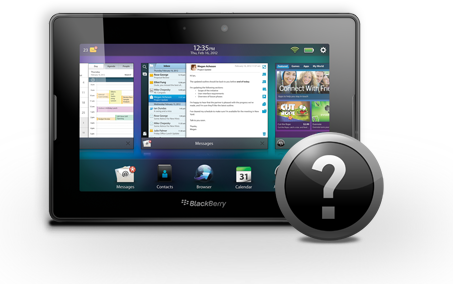 Will the next Playbook look and feel a lot like this one, or will it be radically different? When should we expect the announcement? So many questions, not a lot of answers.

At the BlackBerry User's Forum confab in Dubai, Mike Al Mefleh told Emirates 24/7 that the Playbook product line is very much alive.

We have a very clear road map. The company will launch six additional new devices in 2013, plus at least one new Playbook design. The brand new tablet should launch by the end of the second quarter. Moreover, the old Playbooks will receive a software update to run the BB10 platform -- probably before the follow-up model hits store shelves.

So what does this doublespeak mean? Should Apple and Google brace for a fresh assault from BlackBerry tablets? I see a few distinct possibilities here.

Two of these three outcomes would be bad news for BlackBerry as a brand, and for its investors. Another blah tablet would sink without a trace amid the strong iPad and Android competition.

So, let's hope that Heins presented the correct story, and that BlackBerry takes its time to get this thing right. It can't afford to miss another holiday season, but a back-to-school release that incorporates some new thinking could actually do something here.

Oh, and should we really expect another four BlackBerry smartphone models this year? Hard to tell when we can't be sure who's really in the know.

Will BlackBerry's Next Tablet Shock or Sink? @themotleyfool #stocks $BB Next Article
Current