Cloud storage doesn't have the same razzle-dazzle as a new iPhone or Galaxy smartphone, but it can be just as important as a shiny new product. Consumers may focus on new products, but investors should also be looking at the cloud services that come with it.

Up, up, and away
Strategy Analytics just released a report earlier this week highlighting which services Internet consumers use the most. At the top of the list, and not so surprisingly, was Apple (NASDAQ:AAPL) and Amazon.com (NASDAQ:AMZN). But Google (NASDAQ:GOOGL), with all of it's cloud offerings, fell short in fourth place. Here's how they stack up: 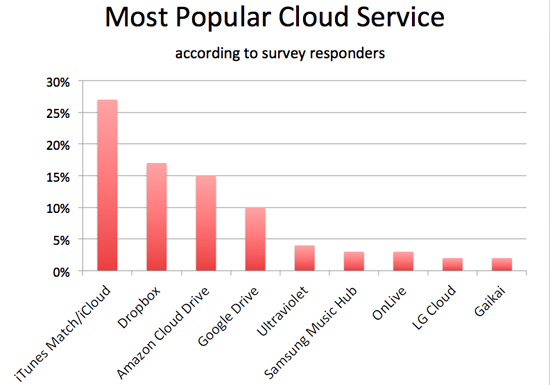 The reason for Apple's dominance may stem from consumers' preferences to store massive amounts of music, rather than any other content. Around 90% of Apple, Amazon, and Google cloud users store music collections. According to Ed Barton at Strategy Analytics, music will continue to be one of the most important features of cloud services. He said in a press release, "Music is currently the key battleground in the war for cloud domination."

What's interesting about the chart is that Google offers certain features like music matching, similar to iTunes Match, for free, but falls behind both Apple and Amazon for cloud storage. Apple charges $25 a year for the service, and Amazon offers 250 songs for free, but then charges $25 as well for up to 250,000 songs.

Building Apple's cloud
With consumers looking to the cloud for more content streaming and storage, Apple is in a good position to benefit from the trend, if it can seize the opportunity. Apple has had some missteps with the cloud in the past, including hang-ups with iCloud and the failed MobileMe and .Mac. But earlier this week, it hired a former Cupertino adversary, Adobe Systems Chief Technology Office Kevin Lynch.

Lynch sparred with Apple in the past over Adobe's Flash technology, but has also helped build Adobe's Creative Cloud software to 500,000 subscribers. Some analysts believe that Apple's new hire will help usher in more cloud services at the company.

The sky's the limit
Apple may not be known for its cloud services now, but if it can harnesses its massive number of cloud storage customers and build some new products through Lynch, it could become a vital part of its business. Some have been critical of Apple's cloud strategy in the past, or lack thereof, but it's clear now that it has the upper hand when it comes to cloud customers.

The critical part for Apple right now is to offer more cloud services to its current customers. As more people become familiar with storing and streaming media within the cloud, Apple may have to introduce products that meet consumer demand. An Apple music streaming service has been the most widely talked-about idea, but for now investors will have to be happy with the company's first place position in cloud storage.