Even though Google (NASDAQ:GOOGL) is undeniably the mobile mapping king, Apple (NASDAQ:AAPL) isn't giving up so easily. That's why Apple has acquired WifiSLAM, a small start-up specializing in indoor GPS, since the next frontier of mobile mapping is inside.

iOS users quickly snapped up the new version of Google Maps once it was released on Apple's platform in December, just months after Apple made the controversial switch to its in-house offering. Google's first-mover advantage is seemingly insurmountable since it has spent years aggregating mapping data that Apple simply doesn't have yet.

On the outside, Google's Street View offers unprecedented reach for an online mapping service. We're talking about the search giant showing users the Great Barrier Reef or more recently, the Himalayas' Mount Everest Base Camp. Meanwhile, Apple's still working on getting down the basics before going mountain climbing.

With WifiSLAM, Apple is taking the mapping fight inside instead of outside.

Let's take this inside

Turn-by-turn driving navigation was reportedly a major point of contention between Apple and Google that led to the switch. Indoor step-by-step navigation, on the other hand, is mostly an untapped frontier.

Google has already begun building out its data on indoor maps, including integrated floor plans in selected locations and a Google Maps Floor Plans service that's still in beta testing. So far, buildings like airports and shopping malls, among others, have partnered with Google to make indoor maps available. Big G doesn't want you running into any Minotaurs, after all. 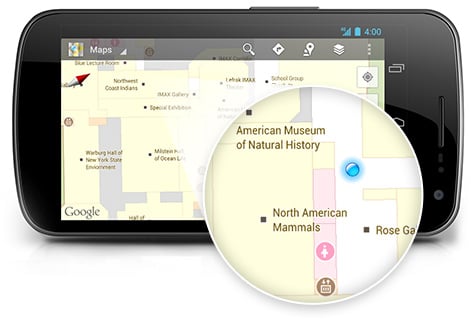 Inside, Google still has a lead over Apple. However, the search giant's indoor initiatives date back to 2011, so Apple has more hope in catching up behind closed doors as opposed to under the sun.

The Mac maker becomes a map maker
Apple has confirmed the acquisition to both The Wall Street Journal and Reuters, without officially disclosing the price. The WSJ's sources peg the price tag at $20 million, which is little more than loose change for Apple.

WifiSLAM is now the fourth acquisition that Apple has picked up to build its mapping service. The Mac maker began acquiring map makers as early as 2009, starting with Placebase for an unknown amount. The company would then proceed to buy Poly9 in 2010 and C3 Technologies in 2011. These three purchases were stitched together to help launch Apple Maps.

Two months ago, there were also rumors that Apple was looking to acquire Waze, the crowd-sourced traffic and navigation service. The acquisition made sense, since Waze is also a small start-up with innovative technology that could be integrated into Apple's offerings, and Waze is already one of Apple's mapping data partners. The proposed deal supposedly broke down over price, as Apple had reportedly offered $500 million but Waze's owners were asking upwards of $750 million to $1 billion.

Apple's ceiling for acquisitions tends to be in the ballpark of $500 million, so it's not surprising that it was unwilling to meet Waze's asking price. The $500 million acquisition of flash specialist Anobit was one of Apple's largest -- bigger than when Apple effectively bought Steve Jobs back via NeXT for $404 million.

Let's all go indoors
There's no question that Google is still the top dog in mobile mapping, and that indoor maps and location services are the next frontier.

Less than a year ago, nearly two dozen companies, including the likes of Nokia (NYSE:NOK), Qualcomm (NASDAQ:QCOM), and Samsung, got together to launch the In-Location Alliance to give indoor location services a boost. Mapping is one of Nokia's three main operating segments, even if it's relatively small at 4% of sales last year. Qualcomm also likes to invest in all sorts of new areas of research and development, like some of the random stuff it showed off at CES. Not all of these pan out, such as its Mirasol display technology that it axed last year, but the good news is that the company fails cheaply.

With WifiSLAM, Apple is buying its way indoors.