It has been said that professional mutual fund managers are no better at picking stocks than a dart-throwing chimp. It turns out this quip is insulting to chimps.

In any given year, the majority of professional fund managers underperform their benchmark index -- a virtual certainty given a limited amount of return to capture and an unlimited amount of fees to charge.

That stat alone would be dreadful. But digging deeper, it gets far worse.

In other words, the overwhelming majority of professional fund managers picked the minority of stocks that underperformed the market. It takes skill to be that bad.

(For the curious, the average stock that rose more than 2.07% returned 20.4%, while the average stock below that threshold fell 16.6%, and coincidentally, the two groups had virtually identical standard deviations.) 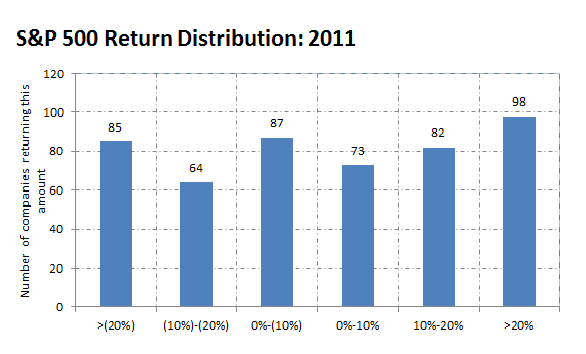 This isn't rare, and it extends beyond fund managers to Wall Street analysts. According to Bloomberg, "The 50 stocks in the S&P 500 with the lowest analyst ratings at the end of 2011 posted an average return of 23 percent [in 2012], outperforming the index by 7 percentage points." In a study of 3,000 stocks from 1983 to 2007, Longboard Asset Management showed that 64% of stocks underperformed the market. Yet, according to the Vanguard Group, 72% of actively managed funds underperform their benchmark over a 20-year period, removing the effects of survivorship bias. So over the long haul, a higher percentage of fund managers underperform an index than stocks underperform an index. On average, fund managers appear to be worse than dart-throwing chimps. And they charge big fees to boot.

The fees are what's unfortunate here. In one report, IBM concluded that global money managers overcharge investors by $300 billion a year for failing to deliver returns above a benchmark index. Vanguard cites data by the Financial Research Corporation showing that the single best predictor of a fund's future performance is its expense ratio.

A common rebuttal is that, while money managers underperform an index, they are better at managing risk and lowering volatility. Nevermind that this goal never seems to appear in annual reports and prospectuses -- or if investors signed up for such an arrangement -- but it's empirically false. Yihua Zhao of the University of Texas has shown that the average mutual fund has a beta of 1.001, meaning it tracks the ups and downs of the overall market almost to a T.

Some professional managers can beat the market and earn their fees. The good majority can't. If you don't have the time or inclination to manage your own money, you're likely to do best buying a passive low-cost index fund. You'll (literally) become a Wall Street star without lifting a finger.

Morgan Housel doesn't own shares in any of the companies mentioned in this article. Try any of our Foolish newsletter services free for 30 days. We Fools may not all hold the same opinions, but we all believe that considering a diverse range of insights makes us better investors. The Motley Fool has a disclosure policy.