A number of analysts now expect Google (NASDAQ:GOOGL) to hit $1,000 by 2014. The media hype surrounding the possibility, however, is mostly superficial guesswork; most authors avoid giving the numbers a close look. Let's break from that trend today with a disciplined assessment of how likely this price target really is.

What's Google worth?
Using a discounted cash flow, or DCF, model for valuation is a simple way to value an asset. If you're not familiar with the term, don’t let it intimidate you. It's simply a way to find the intrinsic value of an asset by projecting future cash flows and discounting those cash flows by the time value of money.

Forecasting anything in business perfectly is, of course, nearly impossible. So the model's results can really only be as good as the inputs; the principle of "garbage in, garbage out" holds. To account for human error, investors should require some sort of margin of safety, or a discount to fair value, to the resulting fair value price.

Using a simple DCF valuation spreadsheet, we can peg a fair value estimate onto Google shares.

The first step is to project free cash flow, or FCF, growth over the next 12 months. As Google's negative trend in cost-per-clicks bottoms out, I think it's safe to expect that FCF could grow in line with the company's most recent year-over-year revenue growth rate of its Google-owned sites segment: 18%.

The projected FCF growth over the next 10 years would look like this: 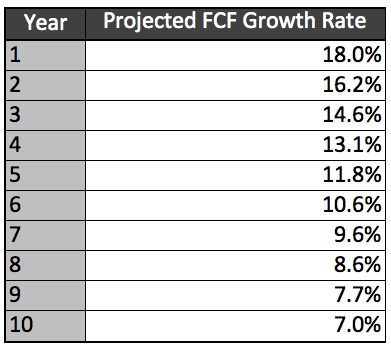 The final step is to decide on a perpetuity rate and a discount rate. A perpetuity rate simply gives a value for the years beyond year 10. We'll estimate growth of 3% per annum (in line with the historical rate of inflation) beyond year 10. The discount rate is the annual rate an investor requires in order to convince him to set his money aside in the stock market and hope for more money later; we'll go with 10% -- typical in a DCF analysis.

And now for the verdict: With these inputs, Google is worth $1,170 per share. To account for human error, investors should require a margin of safety to their fair value estimate. At today's price, close to $810, Google has a 30% margin of safety.

Facebook's digital advertising revenue, according to the Pew Research Center, actually grew faster than Google's in 2012: up 24% from 2011, compared to Google's 20% growth. Plus, the launch of its new timeline should make its platform more indispensable to users and its advertising solutions more targeted and effective than ever before. But the company's valuation is a bit pricey, keeping many investors glued to their seats.

Yahoo!, on the other hand, looks fairly cheap at 17.8 times projected forward earnings. Since Yahoo! CEO Marissa Mayer took over five months ago, shares are up 50% as investors have gained confidence that the company can pull off a turnaround.

Both Facebook and Yahoo! will likely bring the heat in 2013. And both companies are worth a closer look.

Then, of course, there's Baidu (NASDAQ:BIDU) -- China's online search king. Despite a year-over-year 36% increase in EPS in the company's fourth quarter, the stock trades at just 17.7 times earnings, or 13.5 times projected forward earnings.

Though Apple's (NASDAQ:AAPL) hardly in the search business, it would be like avoiding the elephant in the room if we didn't consider the company's unreasonably cheap valuation as an opportunity cost to a Google investment. It looks strong on its Motley Fool CAPS page, with all 60 analysts covering the stock and the majority of All-Star players giving it an outperform rating. Furthermore, Apple currently has a four-star CAPS rating

Google's the safest bet
Apple and Yahoo! look like great value bets for the patient investor. Facebook also looks tempting in light of the company's extraordinary growth prospects -- but these prospects come at a hefty price. Baidu is a solid investment at a great price, but China's uncertain government and regulatory environment makes the investment a bit risky.

Google, however, stands out as not only undervalued, but the safest long-term bet of the bunch. As a market leader with significant market share in a profitable and growing industry, Google seems to truly deserve a $1,000 price target.