For the second time in as many weeks ConocoPhillips (NYSE:COP) has announced another big oil discovery in the Gulf of Mexico. This time the company’s Coronado prospect, which it owns with Chevron (NYSE:CVH) and Anadarko (NYSE:APC), has hit pay dirt. While the discovery isn’t as large as the one it announced last week, it’s another validation of the company’s big bet in the Gulf.

Drilling down into Coronado

The Coronado prospect, which is operated by Chevron, was drilled in 6,127 feet of water and to a depth of 31,866 feet. The partners encountered more than 400 feet of net pay, which is the thickness of the reservoir that is capable of producing commercially viable oil and gas. While the results are still being evaluated, and additional appraisal will be needed, this is great news for Conoco and its partners.

Coronado is located just 12 miles from last week's Shenandoah discovery. That prospect has seen two appraisal wells drilled, with net pay coming in at 300 feet and most recently 1000 feet. Taken together, Conoco’s position in this part of the Gulf -- called the Lower Tertiary Trend -- is very promising.

Conoco in the Gulf
These recent discoveries are likely just the tip of the iceberg for Conoco. The company is among the largest leaseholders in the deepwater of the Gulf of Mexico with about 2 million net acres. Conoco and its partners plan to drill five wells this year with an additional three wells possible.

Looking ahead, Conoco investors should keep an eye out for announcements on its next two prospects. Drilling at the company’s Adrennes prospect was started earlier this quarter and its Thorn well is scheduled to begin in the second quarter. Thorn is the only of the five planned wells that is operated by Conoco so its results will be important to watch. The company has a 65% working interest in Thorn which as you can see from the map below is about double the interest it has in both Shenandoah and Coronado. 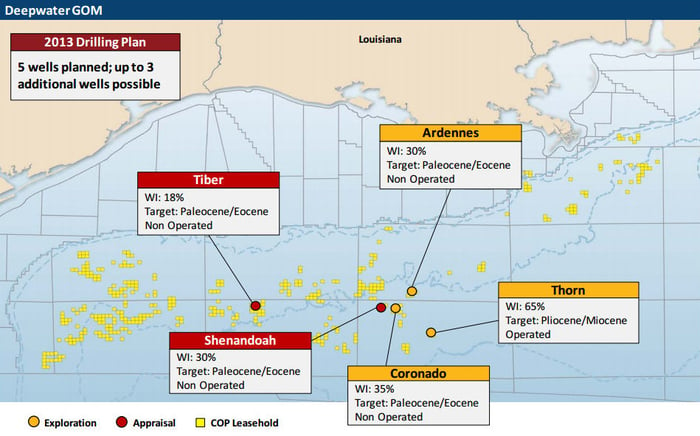 My Foolish take
ConocoPhillips has ambitious plans to grow its production by 3%-5% annually through 2017. However, the Gulf of Mexico represents the company’s next phase of production growth beyond that time frame. This second discovery really helps to further validate the company’s big push into the Gulf. After years of repositioning the company, Conoco is beginning to prove that those were the right moves -- sooner or later investors will take notice.