Business is so good at EQT's (NYSE:EQT) natural gas fueling station that the company is adding a second fueling island at the station. That's really good news for the Pittsburgh-based exploration and production company -- it's a validation that natural gas is beginning to catch on as a transaction fuel in the region. The company, which is one of the lowest-cost producers of natural gas in the Marcellus, is just one of many companies investing to increase demand for natural gas.

The EQT station, which incidentally is just down the road from my home, is a steady reminder of how cheap natural gas is as a transportation fuel. Every time I pass the station it's at least a dollar and a half cheaper than regular gas. Apparently, that difference was not lost on its growing customer count, who have deemed the difference being worth the cost of conversion.

EQT, of course, is not the first producer to make an investment in natural gas fueling infrastructure. The nation's No. 2 natural gas producer, Chesapeake Energy (NYSE:CHK), invested $160 million for a stake in Clean Energy Fuels (NASDAQ:CLNE). That deal provided Clean Energy with big cash infusion to help fuel the build-out of America's Natural Gas Highway (pictured below). 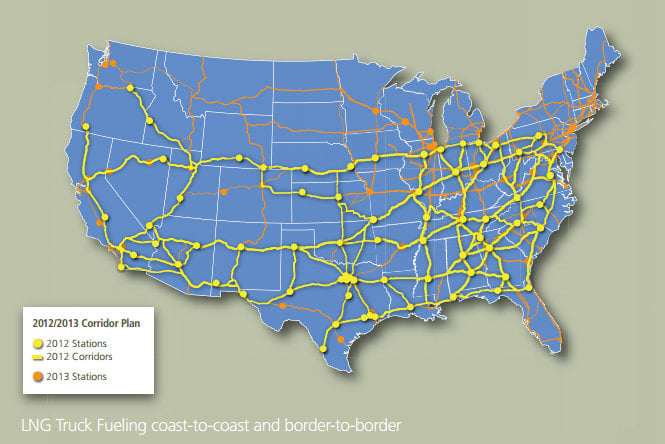 While Chesapeake is looking to divest of its stake in Clean Energy, that has nothing to do with the future of the natural gas fuel business. Clean Energy is growing rapidly; its gallons delivered jumped 25% year over year to 194.9 million gallons. The company believes it's well-positioned for an exciting year in 2013 as its sees the beginnings of a transition to natural gas by the heavy-duty trucking industry.

That means a bright future for natural gas engine partners Cummins (NYSE:CMI) and Westport Innovation (NASDAQ:WPRT). While there are currently 16 million natural gas vehicles in use around the world, just 126,000 of them are in North America. The industry believes this number will explode over the coming decade with more than 50 million natural gas vehicles in use across the world. That could yield explosive growth for the Cummins Westport joint venture given its technical leadership in the industry.

While lack of refueling infrastructure had been holding back the growth of natural gas vehicles in the U.S., that burden is quickly being lifted thanks to companies like EQT and Clean Energy. This is a really exciting time in the energy industry -- each passing day we take one step closer to a natural-gas-powered future.