Last month, Dillard's approved a $250 million share repurchase program for the fifth time in the past three years. However, most of the repurchase authority will probably remain unused until 2014.

On March 22, department store chain Dillard's (DDS 7.73%) announced that it had completed its 2012 share buyback plan, and initiated a new $250 million share repurchase program. In the past three years, share repurchases have become an important tool for increasing shareholder value at Dillard's. So far, investors cannot complain about the results, as the company's stock has nearly quadrupled during that time period: 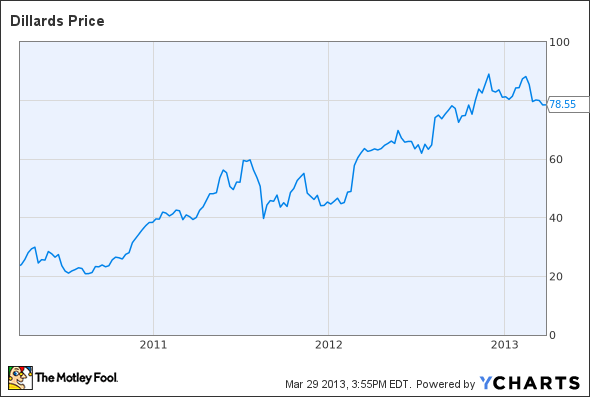 Dillard's recent 10-K filing disclosed that the company has repurchased $1 billion of its stock since August 2010. These share buybacks have reduced Dillard's share count from approximately 73.8 million in 2009 to 47.3 million as of March 2. This has boosted EPS by more than 50%, which (along with improved operating results) has driven the stock to record highs. However, the rapid rise in Dillard's stock price means that the company's new buyback program is much less likely to create value for shareholders.

The danger of share buybacks
Share repurchase programs typically benefit shareholders by reducing share count and thereby increasing EPS. They are therefore a hallmark of shareholder-oriented management teams. However, buybacks only create shareholder value if the company's stock is undervalued. Most of Dillard's repurchases from the past three years occurred when the stock was trading between $30 and $45. With shares now worth nearly $80 -- approximately 12.5 times trailing EPS -- it is not clear that Dillard's shares are undervalued anymore.

The danger of major share buybacks is that executives often overpay in their zeal to return cash to shareholders. For example, in 2011, Dillard's competitor J.C. Penney (JCPN.Q) spent $900 million to repurchase stock at an average price of nearly $37 per share. Today, J.C. Penney shares are worth just $15, meaning that the company destroyed more than $500 million of shareholder value in that transaction. Moreover, J.C. Penney's recent dismal performance has raised fears that the company's liquidity is inadequate in light of its ambitious transformation plans.

Of course, Dillard's is unlikely to see a massive slide in performance, as has occurred at J.C. Penney. On the other hand, comparable-store sales growth missed expectations last quarter, and cautious forecasts from across the retail sector imply that earnings growth is likely to be modest at best this year.

What should you do?
To some extent, Dillard's new share repurchase program is a meaningless gesture. The company had just $124 million of cash as of early February, and spent $92 million since then to complete the previous buyback. Given the lack of cash on hand, Dillard's is unlikely to use much of its repurchase authority until the fourth quarter, which is when retailers generate most of their cash flow.

Macy's (M 19.31%) seems like a more attractive investment opportunity in the department store space. Like Dillard's, Macy's has seen strong profit growth recently and has a shareholder-friendly capital allocation policy, with approximately $1.5 billion of outstanding repurchase authority as of early February. However, unlike Dillard's, Macy's actually has a significant amount of cash on its balance sheet to fund its buyback: more than $1.8 billion as of Feb. 2. Dillard's buyback strategy appears to be running out of steam, but the buyback story may just be beginning at Macy's.