Graphics-focused chip maker NVIDIA (NVDA) has a lot going for it, but there are reasons to be cautious as well.

I've had my eye on NVIDIA (NVDA 1.10%) for a while now. As an old-school fan of PC games, I've used several NVIDIA graphics cards over the years, and as a follower of the fast-changing mobile landscape, I can appreciate the chipmaker's efforts to diversify into the biggest new personal computing market since the market was created in the 1980s. However, I haven't quite been able to step over the line and actually buy NVIDIA for my personal portfolio, as I've watched its stock lose an unexpectedly large amount of ground against the indexes for the last two years despite a stream of (generally) positive news: 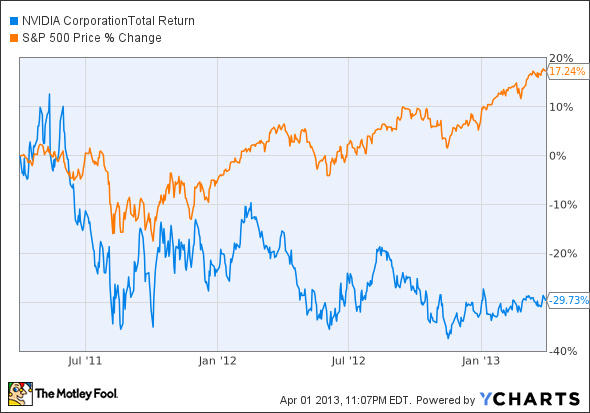 What's wrong with NVIDIA today? Are its problems too great to justify investing in it, or is the company poised for a mobile turnaround on the strength of its latest Tegra processors? Let's dig into some pro and con arguments to figure out whether NVIDIA should be part of my (or your) portfolio, or if it's better watched from afar.

Pro: Tegra 4i looks to get a leg up on the competition
NVIDIA's latest smartphone chip, the Tegra 4i, is shaping up to be a watershed release for the company's mobile efforts. It's the first NVIDIA chip with an integrated wireless 3G/4G LTE modem, and just as importantly, it's purportedly half the size of smartphone processor market leader Qualcomm's (QCOM 0.09%) competing Snapdragon 800. Small is beautiful when it comes to smartphone components, both in terms of the space premium for a device's internal layout and in terms of its power consumption. NVIDIA CEO Jen-Hsun Huang pointed out that "we'll have some phone success this year, but we're not expecting to have a whole lot of phone design wins until we engage the market with LTE." Well, NVIDIA's engaged the market now.

Con: NVIDIA is still far behind in mobile processors
The Tegra 4i is a big leap forward for NVIDIA, but it may not be enough to upend Qualcomm from its dominant position in smartphone processors. The Tegra 4i may be smaller than Qualcomm's latest, but the new Snapdragons purportedly retain a power-consumption advantage. Qualcomm executives continue to boast of superior performance, which could be bluster, but may well not be -- the market leader's R&D spending over the past four quarters is nearly four times NVIDIA's, and Qualcomm has every incentive to laser-focus itself on holding that lead.

In the most recently available quarter, Strategy Analytics showed Qualcomm far in the lead on smartphone applications processors with a 42% market share. Samsung comes in second with 27%, in large part because of a long-standing relationship with Apple (AAPL -2.46%). NVIDIA doesn't even crack the top five, and its smartphone share has been "relatively flat" year over year.

Pro: NVIDIA leads in non-Apple tablets
There is one area where NVIDIA bests Qualcomm: Android tablets. Apple still controls nearly half of the total tablet market, but NVIDIA holds about 17% of the rest -- good enough for a 36% market share in Android tablet processors, according to data compiled by my colleague Chris Neiger. Many projections anticipate continued Apple category dominance, with IDC expecting iOS tablets to command 44% of the market in 2017, compared to 46% for Android. However, IDC sees over 350 million tablets shipping worldwide that year, an 83% increase over 2013's projections. That's about 58 million tablets using NVIDIA's chips, assuming no further market shifts. That's pretty good growth, don't you think?

Con: NVIDIA doesn't actually hold a category lead anywhere
NVIDIA still trails Apple's proprietary tablet chips by a large margin, and the competition for Android tabs is likely to heat up in the near future. Historically, NVIDIA has been most known for its PC graphics processors. However, the company doesn't come close to leading that market when you look at the full range of products. The latest data from John Peddie Research indicate that Intel (INTC -0.80%) holds a commanding lead in "discrete GPUs," which is any dedicated graphics chip on a PC:

AMD is clearly the big loser lately, but NVIDIA hasn't been picking up share at the same pace as Intel, which means that not only is it failing to capture market share from the leader, but it's effectively ceding ground. Granted, the overall PC market has been eroding in recent quarters -- all three chip makers saw year-over-year shipment declines -- but a leading position can provide a more stable base from which to branch out. Intel is working its way into mobile chips as well, and although it's well behind NVIDIA right now, its resources are greater than both NVIDIA's and Qualcomm's combined.

Discrete mobile GPUs aren't as popular as their PC cousins, but NVIDIA trails market leader Imagination Technnologies' PowerVR by a wide margin in that area, as well. PowerVR purportedly commanded 78% of the mobile GPU market in midyear 2012, while NVIDIA and Qualcomm combined for less than 20%. Then there's the matter of its sixth-place smartphone finish.

Pro: NVIDIA is (usually) consistently profitable
NVIDIA has had a rather variable history of profitability in recent years, but if you look past the company's financial-crisis doldrums, the company has been rather consistent in both profit margins and in its return on equity: 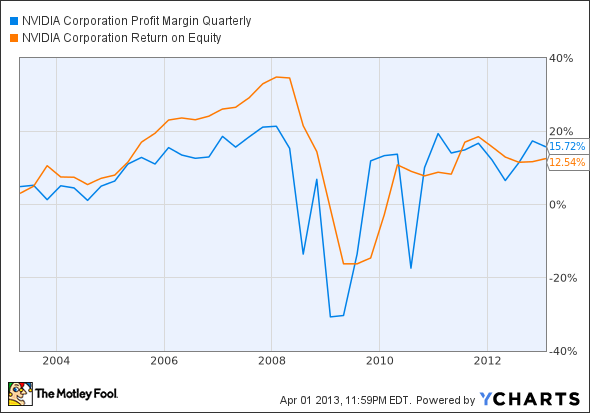 With a P/E near decade lows, NVIDIA looks to be a solid bargain today, particularly if both earnings per share and free cash flow continue to show growth over the coming quarters: 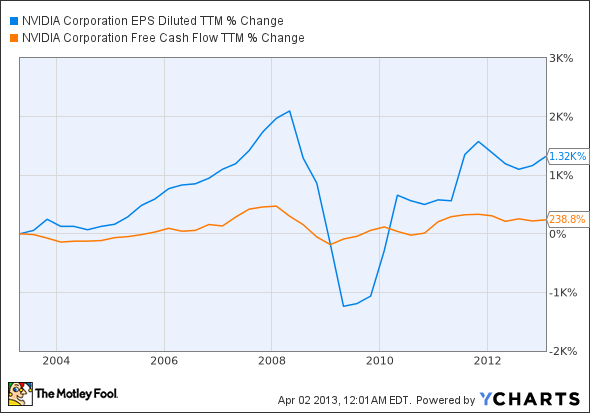 Con: NVIDIA hasn't actually made fundamental progress in five years
A 10-year chart might show some strong growth, but NVIDIA hasn't grown its top or bottom lines from 2009 to the present day: 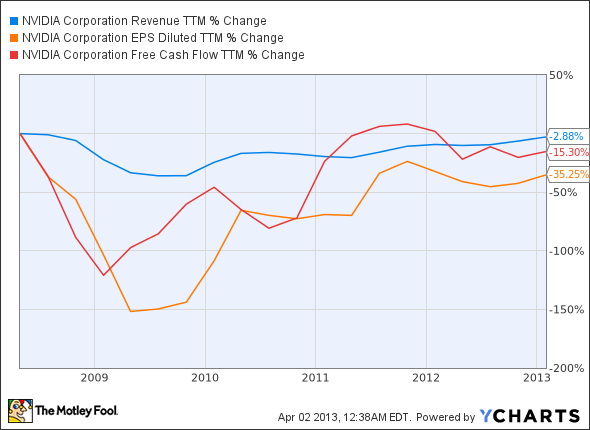 NVIDIA's made some progress toward positive momentum, but it's not there yet. As we head into 2013, the company will benefit simply from shifting the starting point further into the recession period, but that won't be enough to justify investor excitement. Nor have the past four quarters offered great excitement -- NVIDIA's posted a 7% increase in revenue for the trailing 12 months, but declines  on both earnings per share and free cash flow.

The final call: staying on the sidelines
There are reasons to get excited about NVIDIA, but they don't (in my mind) outweigh the reasons for caution. The next few quarters should provide an interesting view of NVIDIA's future, as it moves forward with a true smartphone-chip competitor to Qualcomm. But any big deals will take time to show up on NVIDIA's bottom line, and the challenges of dedicated competitors can't be ignored. I wouldn't vote against NVIDIA with my money, but I wouldn't put cash on the company, either. Show me something great, NVIDIA. I want a reason to change my mind.