The Dow is down following a troubling jobs report, but some stocks are making gains nonetheless.

The one to pay attention is the ADP private-sector jobs report, as a weak Institute for Supply Management nonmanufacturing PMI had been expected.

Analysts had expected jobs growth of 215,000 in March, up slightly from February's previously reported 198,000. In today's report, however, February's total was updated to 237,000 additional jobs. So when March's jobs growth came in dramatically lower than that, the markets dropped. 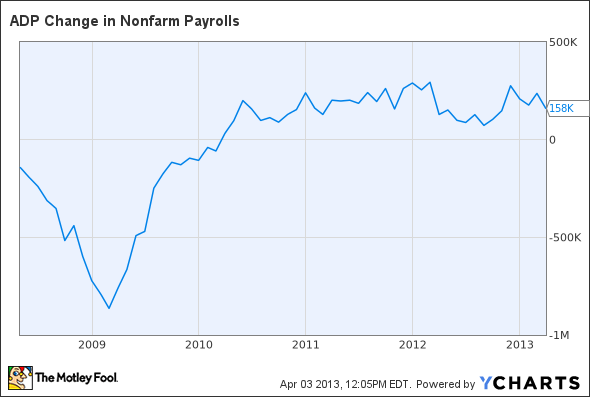 Small businesses added 74,000 jobs, while large businesses added just 47,000. Employment has been a positive so far this year, as both unemployment claims and jobs growth have been trending above last year's levels. However, last week's worse-than-expected unemployment report and today's private-sector jobs report are worrisome. The government reports its jobs numbers later this week, which will include both public and private-sector jobs. We'll have to wait and see what happens.

Today's Dow leaders
Today's Dow leader is Merck (MRK 0.83%), up 2.4%. Merck was a top Dow stock yesterday after the government surprised investors by announcing that Medicare Advantage reimbursements will rise. While they don't benefit Merck directly as they would health care plan providers, higher reimbursements should mean that drug revenue will not fall as previously expected.

Second for the Dow today is Boeing (BA 3.52%), up 1.1%. Earlier in the week, Boeing was down following a report that Boeing delayed a test flight for the 787 Dreamliner over the weekend, as well as reports that the FAA may initially limit the 787 to overland flights, which would be bad news for its Japanese carriers. As I've repeatedly said, the Dreamliner problems are embarrassing for Boeing in the short run but will be a minor blip in the 30- to 50-year future of the aircraft. The stock, however, is up 10% over the past month and roughly the same amount since the FAA first grounded the Dreamliner in January.

Third for the Dow today is United Technologies (RTX 1.80%), up 0.8%. On Monday, the Pentagon announced $445 million in new contracts for some defense contractors, and United Technologies' Sikorsky Aircraft was a big winner. The company was awarded a $155.2 million addition to its contract to supply the military with spare parts. Spending on aircraft has been strong so far this year, though it's expected to slow as the sequester takes effect. However, aircraft will still be flying and needing repairs, meaning there's always demand for spare parts. Fool analyst Rich Smith recently picked United Technologies as his one stock to buy in March; you can read why he likes it here.