In what has been a common theme for crude oil inventories in 2013, the latest week's rise keeps levels "well above the upper limit of the average range," according to the EIA. The nation's supply of oil is now 7.2% above year-ago levels and the highest since July 27, 1990, when it was at 391.9 million barrels. 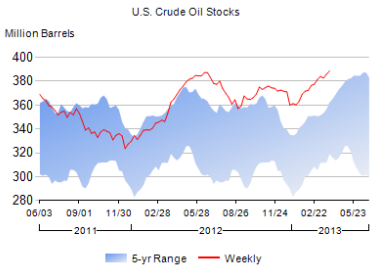 Gasoline inventories dropped 0.6 million barrels after falling 1.6 million barrels the previous week. In contrast to crude oil, gasoline's supply remains within its average range as it tapers off for the summer months. Prices at the pump fell for the fifth consecutive week, down $0.035 to a national average of $3.645 per gallon. That's down $0.11 from a month ago and $0.29 lower than at this time last year. 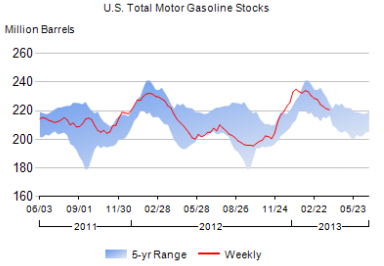 Distillate inventories also fell, down 2.3 million barrels after a 4.5-million-barrel drop the previous week. While crude oil inventories remain well above their upper limit, increasing demand (+5.5%) for distillates may push inventories below their lower limit average in the coming weeks. 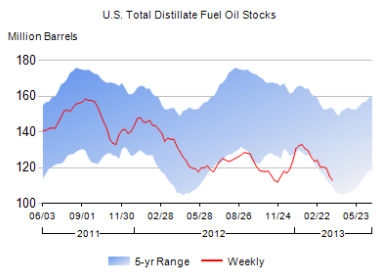