The all-electric vehicle is the world's best-selling pure EV.

It's safe to call me something of a bear when it comes to electric vehicles. Though I find Tesla's (TSLA -6.92%) luxury EVs sleek and awesome, I'm not ready to go so far with the automaker itself and am less than impressed with its quarterly profit reported the other day (at least till I see some hard-and-fast numbers).

And I'm still not willing to think General Motor's (GM -2.19%) Chevy Volt is anything more than a taxpayer-financed, money-losing boondoggle at the moment as U.S. sales of the hybrid EV plunged 35% in March to 1,478 vehicles. And it should be noted that General Electric (GM -2.19%) bought 160 of them -- or 11% -- for its fleet purchases. Consumer demand, therefore, is even less than what's been depicted. Heck, even Tesla's sold more EVs in the U.S. over the first three months of 2013 than GM has sold Volts and that was after juicing the financing with $3,000 in rebates.

Yet consumers are only willing to shell out $4 or $5 a gallon for gas for so long before they start looking at alternatives. And more so than Model Ss or Volts, it seems the EV they want is a Nissan (NSANY -1.67%) Leaf, which recorded its best month ever for sales in March, moving 2,236 vehicles. Indeed, last month was the Japanese car maker's best month ever across its Nissan and Infinity lines, with sales rising to 137,726 units, a 1% increase over 2012. 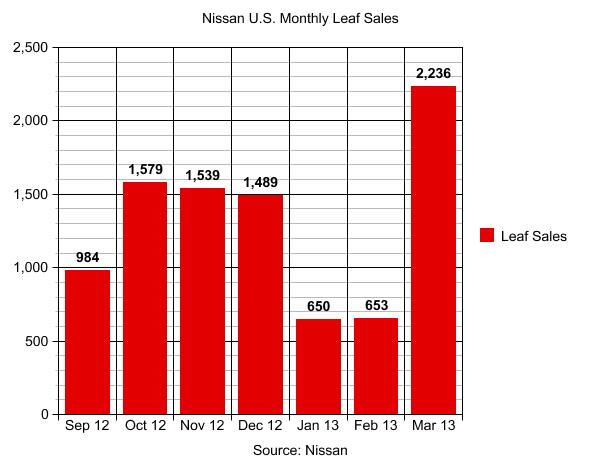 It remains difficult, nevertheless, to estimate real consumer demand for the cars since Nissan's sales have been all over the place. Until last month, it hadn't sold more than 1,500 cars in a month since Nov. 2012.

Along with all my other bearishness on the sector, I'm not sure the technology is completely ready for prime time. While the battery fires GM experienced has died from the headlines and the battery woes of the Tesla are no longer front and center, the implosion of A123 Systems and numerous other battery makers suggests there's still room for technological improvement.

Yet after a sluggish start to the New Year, it could be that Nissan has turned over a new leaf and will give GM, Tesla, and even Toyota a run for their money in 2013.

Running down the highway