Aflac is on the elite list of Dividend Aristocrats. Here's why.

Investors have always been interested in stocks that pay dividends, but lately, low interest rates on bonds and other fixed-income investments have made solid dividend payers even more valuable. Among the most promising dividend stocks in the market is Aflac (AFL 1.65%), and one big reason is that it is one of the few exclusive companies to make the list of Dividend Aristocrats. In order to become a member of this elite group, a company must have raised its dividend payouts to shareholders every single year for at least a quarter-century. Only a few dozen stocks manage to make the cut, and those that do tend to stay there for a long time.

Aflac has a solid business that offers supplemental insurance products to U.S. customers, but many don't know that much of Aflac's business comes from Japan. Let's take a closer look at Aflac to see whether it can sustain its long streak of rewarding dividend payouts to investors.

The latest on Aflac
Aflac has put together a record that makes it one of the best companies in America. With a reputation for fast and efficient customer service and unusually flexible coverage terms for an insurance provider, Aflac has done its best to serve its policyholders, employees, and investors well.

Unfortunately, the strong dollar in relation to the Japanese yen could well hurt Aflac's results going forward. With roughly three-quarters of its revenue coming from the island nation, the currency impact of the yen's recent weakening will reduce the value of its Japanese sales and income in U.S. dollar terms.

Still, the U.S. has been a bigger growth opportunity for Aflac. Last year, the company saw premium sales in the U.S. rise at a 31% clip, compared to just 1.5% in Japan. Moreover, Aflac's ability to adjust premium rates to deal with changing loss experience lets it turn short-term setbacks into longer-term profit boosts.

Companies with strong track records of raising dividends for decades have generally had to overcome challenges along the way. Even in the face of the Japanese earthquake and tsunami back in 2011, Aflac has managed to keep its payouts strong: 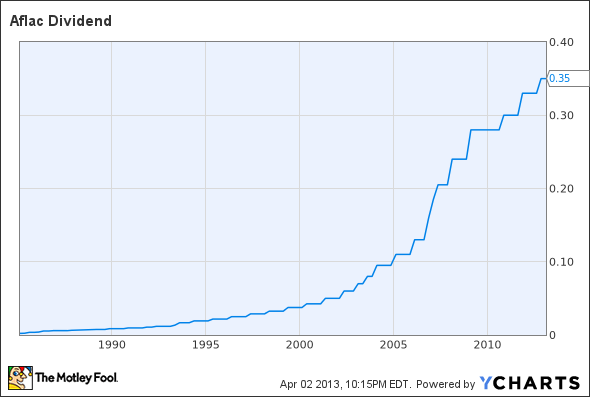 The big unanswered question for Aflac is how Obamacare will affect its supplemental health policies. On one hand, by requiring traditional health insurers UnitedHealth and WellPoint to cover more people regardless of past medical histories, Aflac may see some customers move to more traditional policies that were formerly unavailable to them. Yet if health-care costs declines as a result of Obamacare, then Aflac's policies should get more affordable, potentially raising interest among customers who want the flexibility and ease that Aflac's products offer in comparison to traditional health insurers.

When will dividends rise again?
Aflac raised its dividend last November, which has been typical for the insurance company historically. As a result, investors shouldn't expect another increase until later in the year. With Aflac's long track record of success, however, it's hard to see what would keep Aflac from remaining a Dividend Aristocrat for the foreseeable future.

Click here to add Aflac to My Watchlist, which can find all of our Foolish analysis on it and all your other stocks.

The 3 Best Stocks to Own in Retirement

Aflac: An Owner's Manual for Investors