Despite being vilified by many, Bank of America actually does many things right. 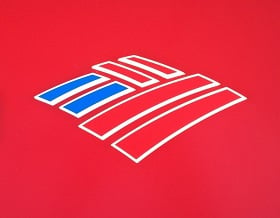 Customers seldom utter those words to the behemoth that is Bank of America (BAC -1.84%). But maybe they should. The bank has undoubtedly ruffled feathers in the past with actions such as the proposed $5 fee for debit card use and onerous overdraft fees, but the bank's focus on innovation on the consumer product front should get a tip of the hat.

The bank's newest feature for its retail customers: an ATM with the capability to virtually interact with a teller.

While the move isn't necessarily one that will cause new customers to flock to the bank, it highlights a continued trend of innovation in the company's consumer banking space. The bank boasts over 30 million active users on its online banking platform and has created an extremely "sticky" environment for these customers with features such as Bill Pay. As the Internet has shifted from desktop to mobile, the bank moved quickly and now sports one of the best mobile banking applications. The number of mobile users was up 31% year over year at the end of 2012.

Despite its mobile success, the bank has continued to viably access different channels under the leadership of Katy Knox, the retail distribution exec, and David Darnell, Co-COO overseeing all individual relationships. To maintain its presence in the payments business, B of A has recently conducted trails for its Mobile Wallet, a program that allows customers to link their debit and credit cards to their phones and pay at participating merchants.

All of these technological improvements and innovations coupled with value-adding programs, such as BankAmeriDeals, which allows merchants to target specific types of customers and offer coupons for those consumers to load onto B of A cards, have positioned the bank to please and serve its customers in a cost-effective manner.

As investors look across today's banking landscape, for the largest U.S. banks, it's not about growing deposits and getting bigger anymore -- it's about keeping your valued customers and serving them in an effective and value-adding way. If B of A can continue to innovate its consumer products and avoid making any major gaffes, customers will continue be more satisfied, potentially buy more services, and maybe, just maybe, say "Thank you."