Jobs, by the numbers.

March's jobs report showed that a net 88,000 new jobs were added last month and the unemployment rate fell to 7.6% -- the lowest level in more than four years.

That was the good news. The bad news is that this is, by most accounts, a dismal result.

Theoretically, at least. Any given employment report has a margin of error of plus or minus 100,000, and nearly all initial reports are revised in subsequent months. Indeed, March's jobs report revised January and February's figures up by 61,000 jobs. One of the only things we are reasonably assured of is that the economy didn't create 88,000 jobs in March -- a truth that never quells the hyperventilating when initial employment reports are released.

To smooth out month-to-month volatility, I look at a rolling six-month average change in monthly jobs: 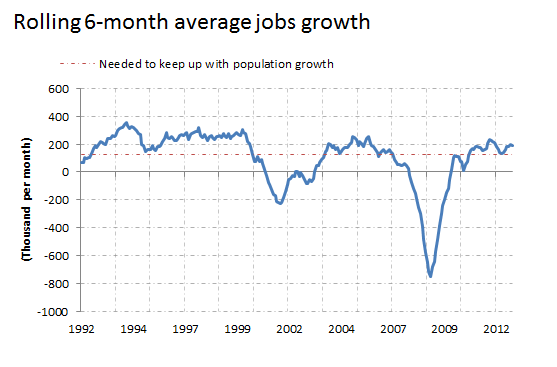 For the last three years, we have created enough jobs to keep up with population growth -- maybe a bit more -- and that's about it. There has been almost no deviation from this trend, too. 2011 saw average monthly jobs growth of 175,000. 2012's average figure was 183,000. In the first three months of 2013 we've averaged 168,000. Statistically, these numbers are almost indistinguishable. It has been one of the dullest recoveries on record. 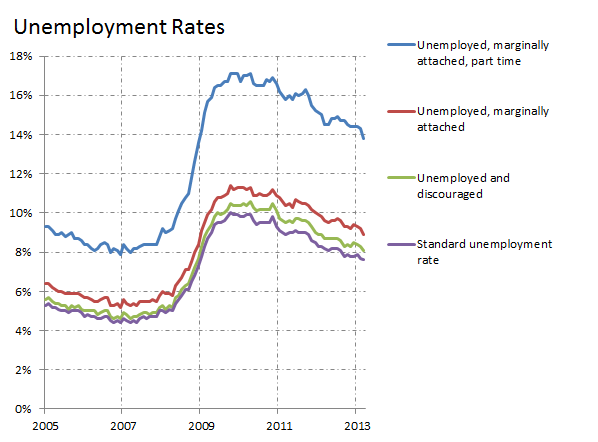 But this poses a question: If jobs growth is so dull, why is the unemployment rate dropping across the board?

In part because fewer Americans are taking part in the labor force and thus aren't counted in the unemployment statistics. The labor force participation rate, which counts working-age Americans who either are employed or are unemployed and looking for work, fell in March to the lowest level since the Carter administration: 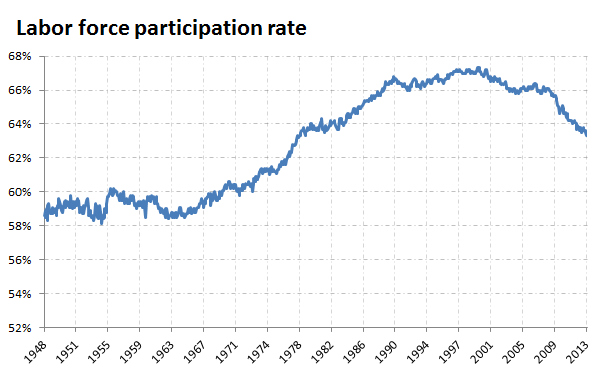 Part of this decline is due to a weak economy. But there's more to it; the decline clearly began before the recession.

There are three big explanations for why so few Americans are in the labor force:

Second, men have been leaving the labor force consistently for more than half a century as women enter the labor force, changing the dynamic of a two-income household. And third, more young Americans in school means fewer looking for work.

But the best context we can put today's jobs recovery in comes from the blog Calculated Risk: 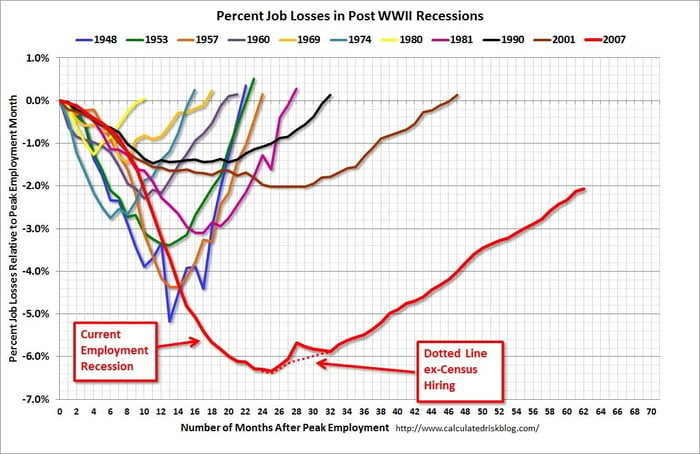 We are living through the worst employment disaster since the Great Depression. After every monthly jobs report, analysts parse the numbers and pick apart the details, but that one sentence is really all that matters.