Is Chevron's stock a buy? A quick look at how it compares with its peers will answer that question.

As one of our largest oil companies, Chevron (CVX 2.32%) is a company you've probably heard of before. In fact, given what you're paying at the pump these days, and all the talk about oil and natural gas, you just might be thinking about buying a few shares of its stock. Before you make that purchase, there are three core areas to its business performance that you need to know a little more about.

Production growth
Topping the list is Chevron's ambitious plan to grow its oil and gas production by 1 million barrels of oil equivalent per day, or MMBOED, by 2017. That would put the company's overall total daily production of 3.3 MMBOE in 2017. That's an ambitious goal, but it would still be a far cry from ExxonMobil's (XOM 2.21%) overall projected production of 4.8 MMBOED by that time. What is different is the rate of growth.

ExxonMobil, for example, expects to add only 600,000 BOED of production over that time frame, which equates to a growth rate of 2%-3% annually. Production growth is really hard to come by as oil companies are fighting an uphill battle against the natural decline of an oil and gas well. Even smaller exploration and production companies such as ConocoPhillips need to spend billions of dollars just to grow production by 3%-5% each year. With that context, Chevron's doing a really great job at growing its production, especially relative to its peers.

Return on capital
That being said, is this a growth at all costs company? Last year, Chevron earned 18.7% on the capital it employed to grow its business. That's a terrific number, but it's not the highest-returning major oil company. That honor goes to ExxonMobil, which enjoyed a return on capital employed of nearly 25%.

However, when you look at other oil majors such as BP (BP 2.65%) and Royal Dutch Shell (RDS.A) you can see that Chevron really does shine. Last year BP's return on capital employed was under 10%, while Shell's was just slightly over 10%. Again, with that as context, Chevron really stands out as company that delivers not just growth, but profitable growth.

Shareholder returns
Growth is nice, but does it translate into shareholder returns? That's the only reason you'd be buying its stock, so a history of returns something you'll want to see. Again, the news here is good, as Chevron's stock has vastly outperformed its peers: 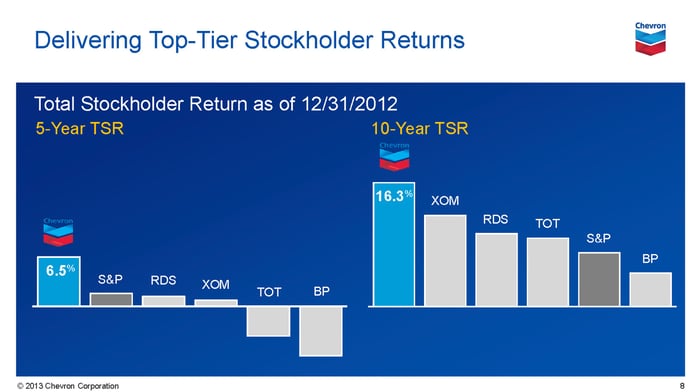 Not only that, but just last year the company increased its dividend by 11% and bought back $5 billion in its own stock. Given the company's projected future production growth and the returns that growth should generate, it's fairly safe to say that investors should do well over the next few years.