Rumors of the death of Amazon's retail threat are greatly exaggerated.

Has the Amazon.com (AMZN -1.98%) retail threat been defanged? Looking just at some of the stocks that the company ravaged last year, you might think so. 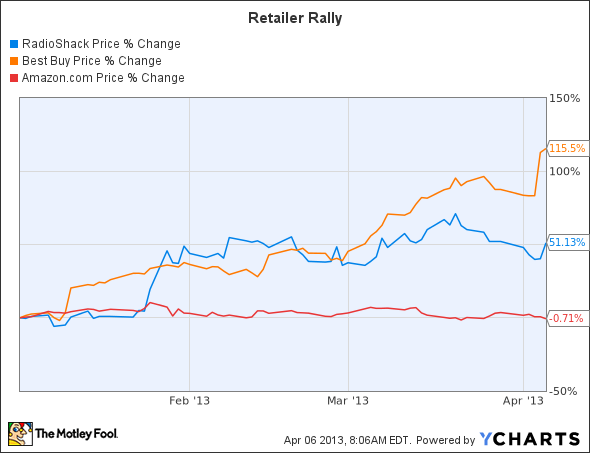 Which way to the showroom?
Sure, traditional retailers have some cause for optimism. For one, the dreaded "showrooming" effect -- where customers shop inside a bricks-and-mortar store to check out a product before buying it for less online -- hasn't actually turned out to be The End of Physical Retailing. After all, Best Buy and Target have both been guaranteeing prices against Amazon for months, and it hasn't destroyed their profit margins. Best Buy even told The Wall Street Journal, "We love showrooming."

The online-vs.-offline price gap is closing by other means, too. Amazon now collects sales taxes from a much bigger slice of the U.S. population.  And a national law could soon bring all online sellers into the state sales-tax pool in one swoop. But federal law or not, the writing is on the wall. The sales-tax advantage that Internet retailers have enjoyed over their local competitors is ending.

Tide isn't turned
But I wouldn't be so quick to count Amazon out. Its small tax loss also came with a big gain. The online seller can now build massive new warehouses as close to shoppers as it wants. That means that it can offer even cheaper -- and faster -- shipping to its growing ranks of customers.

And that feeds into the real threat that should have Amazon's retail competitors worried: its Prime membership service. These are the subscribers who get unlimited two-day shipping on most Amazon products for a $79 yearly fee.

While the company doesn't share membership figures, independent estimates have put the count at more than 10 million strong. That's great for Amazon, because once shoppers become subscribers, they tend to buy a wider range of products from the e-tailer. And Prime members spend much more at the site, logging better than twice as much in annual spending over non-Prime customers.

Foolish bottom line
Physical retailers such as Best Buy and Radio Shack can breathe a little easier knowing that showrooming isn't going to kill their businesses anytime soon. But they'd be crazy to let their guard down now. Amazon's physical footprint is growing along with its subscriber base, making its retailing threat as strong as ever.