A Fool bets real money in a three-year tussle with Mr. Market.

Each week, I endeavor to report the results of the Big Idea Portfolio, a collection of five tech stocks that I believe will crush the market over a three-year period. I've done it before; my last tussle with Mr. Market ended with me beating the index's average return by 13.35%.

Real money was on the line then as it is now, which means any one of the five stocks you see below could cause me a lot of public embarrassment. Apple (AAPL -1.39%) has caused the most trouble over the past several months. Count this week's 3.5 percentage-point drop as the latest dip.

Apple's stock price has fallen more than 33% over the past 12 months and is down 20% year to date, despite an 8% rise in the S&P 500. Holding in hopes of seeing CEO Tim Cook and his team make good on long-promised innovations in delivering televised entertainment has cost me dearly.

Bullish investors will nevertheless tell you that Apple stock looks like a bargain at current prices. They're right. Google and Microsoft (MSFT 0.80%) both trade at a noticeable premium to Apple when you factor in liquid assets: 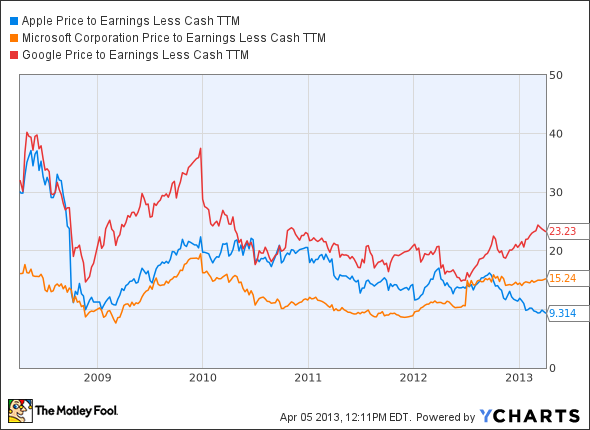 Selling now would amount to declaring that the Mac maker is incapable of generating even 10% annual earnings growth for the foreseeable future. Analysts are modeling for 18.9% annual gains over the next five years, according to Yahoo! Finance.

A decade of investing has taught me that winning is less a matter of wits and more a matter of willpower. Apple is testing my will to hold, so I shall.

What's the Big Idea this week?
Elsewhere, Google and Riverbed Technology barely budged as my other two tech holdings plunged, costing me another 420 basis points in my three-year battle with Mr. Market. Among the indexes, only the Dow reported a marginal 0.19% gain.

Source: Yahoo! Finance.
*Tracking began at market close on Jan. 6, 2012.
**Adjusted for dividends and other returns of capital.

What's caught your eye in the tech world? Do you believe Apple's stock price will rebound ahead of earnings, or are we in for more losses? Let us know what you think in the comments box below.