Much of Samsung's rise to the top of the global smartphone market can be tied directly to the size of its marketing budget. The South Korean company has pulled out all the stops when it comes to building its Galaxy brand. Its U.S. marketing budget jumped more than five times last year, surpassing the ad spending of primary rival Apple (NASDAQ:AAPL).

Even as Samsung is now the No. 1 smartphone vendor, many onlookers wonder where its priorities lie. The company has seemed content to dramatically increase its advertising campaigns, while many question its interest in building higher-quality products. Even its high-end flagship devices remain encased in plastic; many rivals in the market segment have begun to place a higher emphasis on build quality.

Here's more evidence that Samsung cares more about marketing than it does about product innovation.

Money is where the heart is

Resource allocation can tell investors a lot about what a company values. At the same time, that spending is expected to yield tangible results in the form of innovative features. Samsung unveiled a slew of new features in the Galaxy S4, such as Air Gesture and Smart Scroll, but early reviewers considered most of them novelties.

Looking at how much Apple and Samsung each spent on advertising and marketing compared with research and development paints a clear picture. 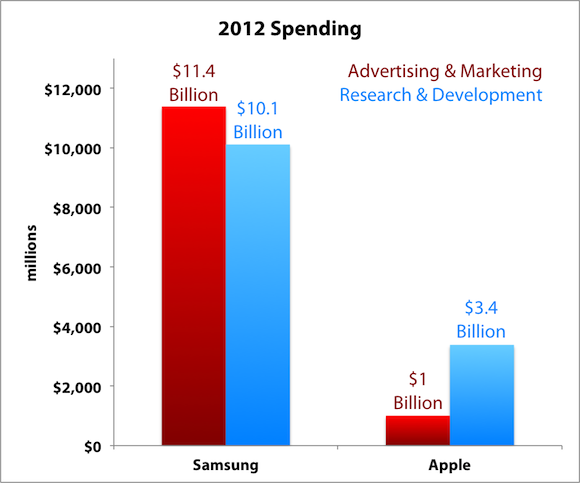 Samsung put more money into its global marketing and promotional campaigns than it did into R&D last year, while Apple spent more than three times as much on R&D as it did advertising. In absolute dollars, Samsung vastly outspent its rival from Cupertino in R&D, but Samsung also has countless other divisions that it needs to sustain.

Last week, a Samsung spokesman told Reuters, "We'll keep boosting our R&D spending, while marketing will be executed flexibly according to market conditions."

Apple is also generally known to spend rather efficiently when it comes to R&D, which comprised just 2.2% of fiscal 2012 revenue. Samsung's R&D spending for 2012 amounted to 5.7% of sales.