Please ensure Javascript is enabled for purposes of website accessibility
Log In Help Join The Motley Fool
Free Article Join Over 1 Million Premium Members And Get More In-Depth Stock Guidance and Research
By Morgan Housel - Apr 8, 2013 at 9:58AM

Two for me, none for you.

It's time for an update of a chart we've posted before: 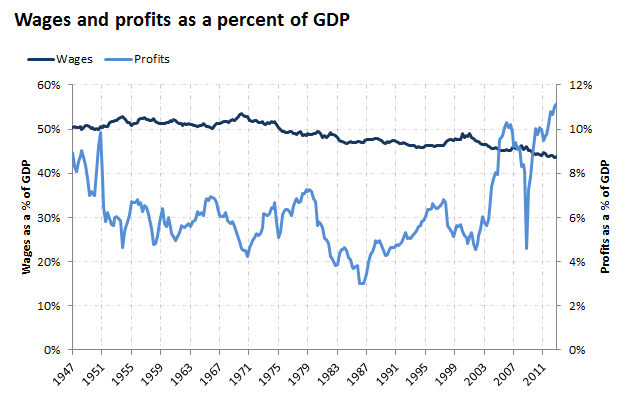 The drift between these two adds up to an enormous sum. Peter Orszag wrote last year: "If labor compensation hadn't fallen so much as a share of national income, American workers would be enjoying about $750 billion more in take-home pay."

Now, this chart isn't as simple as it looks. Part of the reason wages take up a smaller share of the economy is because benefits like health insurance take up a larger share of workers' total compensation. And part of the reason corporate profits have grown as a share of the economy is because of a shift from industrial-commodity corporations to technology firms that naturally have higher margins.

But there is no doubt that part of the swing between wages and profits is explained by one growing at the expense of the other. This is natural -- we've been through two other cycles since 1900 -- but I wonder how long the current cycle can last. Take this recent story about Wal-Mart (WMT -0.85%):

Walmart, the nation's largest retailer and grocer, has cut so many employees that it no longer has enough workers to stock its shelves properly, according to some employees and industry analysts. Internal notes from a March meeting of top Walmart managers show the company grappling with low customer confidence in its produce and poor quality. "Lose Trust," reads one note, "Don't have items they are looking for -- can't find it."

There comes a point where it is in capital's best interest to increase labor's share of output. If Wal-Mart is any indication, we're probably pretty close to that point.