Investors are now exactly two weeks away from Apple's (AAPL 1.89%) fiscal second quarter earnings release. The Mac maker's March quarter has now closed, and now it's up to the bean counters to do their thing before releasing the numbers to investors.

Some called last quarter the most important earnings release in years, and investors were none too happy about the figures. For the upcoming earnings report, there's one important storyline for investors to watch for.

For the second half of March, Chinese state-owned media was running an all-out anti-Apple campaign, stemming from perceptions that the company's warranty policies put Chinese consumers at a disadvantage to their counterparts in other parts of the world.

Cook addressed the concerns head on with an apology and some policy tweaks, but only after two weeks of sustained Apple bashing. That's nearly one-sixth of the entire quarter, which has the potential to put a dent in Apple's results in the region. 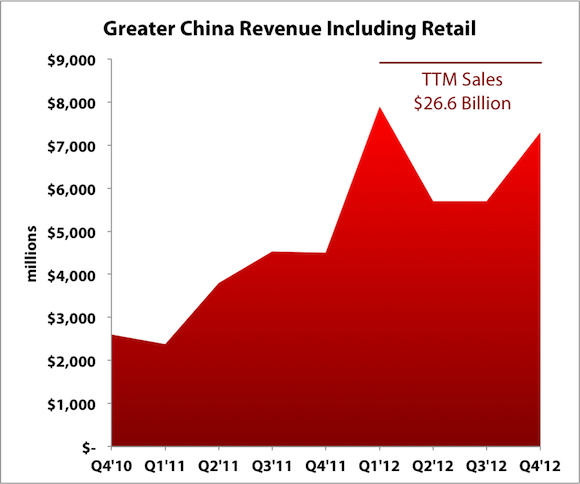 Back in 2010, the Chinese media ran a similar campaign against Hewlett-Packard (HPQ -1.03%), which led to the PC giant losing roughly half of its market share in the country. HP's business in China has never recovered, while local rivals like Lenovo, Acer, and Asus have been more than happy to pick up the slack. Earlier in the month, Citigroup analyst Glen Yeung estimated that if Apple saw a similar fate, it could translate into revenue losses of up to $13.1 billion. The comparison was an overgeneralization, but Apple's results could have definitely been affected to some extent by the campaign.

Apple now reports "Greater China" as a separate geographical segment, which primarily includes just direct online sales. When including its retail segment (11 stores currently in Greater China), Apple is up to $26.6 billion in trailing-12-month sales in the Middle Kingdom. Cook typically provides the total figure including retail on the conference call.

Investors should keep a close eye to see if Apple's Greater China revenue took a hit as a result of the anti-Apple campaign.