Please ensure Javascript is enabled for purposes of website accessibility
Log In Help Join The Motley Fool
Free Article Join Over 1 Million Premium Members And Get More In-Depth Stock Guidance and Research
By Adam Levine-Weinberg - Apr 9, 2013 at 10:21AM

Small-cap stocks can offer individual investors significant advantages, compared to larger and more widely followed stocks. Hawaiian Holdings and Republic Airways are two small-cap stocks in the airline sector that could be poised for big gains in the next few years.

Small-cap stocks (stocks with a total market capitalization between $300 million and $2 billion, roughly speaking) can provide great investment opportunities for individual investors for several reasons. First, they tend to receive much less coverage from professional analysts, which means that if you do your homework, you can level the playing field with Wall Street. Second, many big institutional investors avoid small-cap stocks because they want to invest a lot of money at one time, which is easier to do with multibillion dollar companies. Together, these factors can occasionally allow you to find great bargains, which are typically harder to find among better-known companies.

In this article, I will highlight two deeply undervalued small-cap stocks in the airline sector. Both trade at rock-bottom forward earnings multiples (less than six times expected 2014 earnings, below peers). Yet both companies have strong business prospects and are expected to grow their earnings over the next five years. Accordingly, I expect these two stocks to beat the market over the next few years.

Hawaiian Airlines: ready to fly again
Hawaiian Holdings (HA 8.09%), the parent company of Hawaiian Airlines, has seen very inconsistent stock performance over the past year and a half. On three occasions, the stock has approached $7 (briefly breaking through that level earlier this year), but each time it has retreated to the $5 level. At Monday's closing price of $5.51, the company has a $283 million market capitalization (which could technically make it a micro-cap, but still places it within the ballpark range for small-cap stocks). 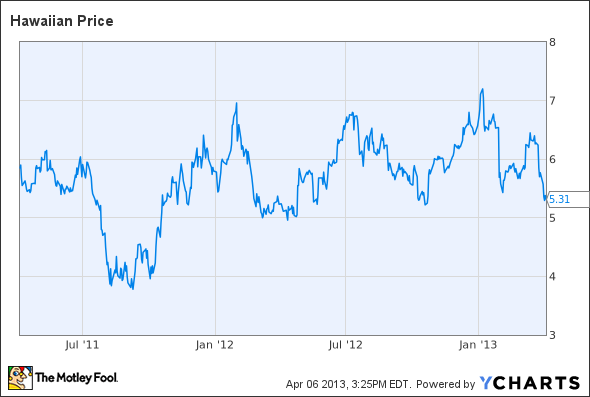 Hawaiian's inconsistency can be attributed to the company's rapid expansion, which has caused earnings results to vary dramatically from quarter to quarter. Yet behind that turbulence, the company is building a strong business model. Hawaiian has dramatically diversified its revenue base in the past three years, so that it is less reliant on the U.S. West Coast-Hawaii travel market. Moreover, it is the only carrier serving many of its new routes, which will give it pricing power, since many travelers are willing to pay a little extra for a direct flight.

Recent earnings misses have led to another sell-off in Hawaiian stock, but these represent growing pains rather than fundamental problems with Hawaiian's business model. Hawaiian actually operates in a less risky segment of the airline sector, as leisure travel demand is more resilient in recessions than business travel demand. The company's growth rate will begin to taper off this summer, and I expect significant earnings increases over the next few years as new routes begin to mature. At five times trailing earnings, and less than four times forward earnings, Hawaiian is a substantially undervalued small-cap stock.

Republic Airways Holdings (NASDAQ: RJET) is another undervalued, under-appreciated small-cap airline stock. At Monday's closing price of $10.64, the company has a market cap of $521 million. Republic Airways has been dogged by its acquisition of two mainline carriers (Frontier Airlines and Midwest Airlines) a few years ago. However, Republic has returned to profitability and is now on the verge of selling or spinning off its mainline operations, which have been consolidated under the Frontier brand.

The likely sale or spinoff of Frontier Airlines makes this a very good time to invest in Republic Airways. Spinoffs can often lead to significant stock price increases, because different shareholders are interested in different parts of the business. In Republic's case, some investors are interested in owning a regional airline (Republic), while others may be interested in owning an ultra-low-cost carrier (Frontier). Furthermore, I have argued previously that there are minimal synergies between the two halves of the business, and so fundamental performance may also improve under separate management.

Based on a peer analysis, Republic should probably be valued at approximately 10 times 2014 earnings estimates, nearly double the current valuation. The Republic regional airline operation is stable and profitable, and its nearest competitor, SkyWest (SKYW 5.74%), trades at 10.5 times forward earnings. The Frontier mainline operation has also been stabilized, has an experienced management team, and is now profitable. Its most similar competitor, fellow ultra-low-cost carrier Spirit Airlines (SAVE 3.22%), also trades at 10.5 times forward earnings. The main reason why Republic trades at such a significant discount to both SkyWest and Spirit is that investors cannot figure out what it stands for. A sale or spinoff of Frontier will solve that problem, and could send the stock much higher.

Foolish bottom line
Small-cap stocks tend to be overlooked by Wall Street and big institutional investors. This gives individual investors an opportunity to find great bargains that Mr. Market is missing, and potentially earn better returns than would be possible for heavily followed large-cap stocks. For the reasons listed above, I believe Hawaiian Holdings and Republic Airways are misunderstood by the market today, and are significantly undervalued as a result. I expect these two small-cap stocks to beat the rest of the airline sector and the market as a whole over the next few years.