Microsoft is set to release updates to its Windows Phone OS that include support for 1080p and new quad-core processors. It's a step in the right direction, but the software maker needs to remember how strong its competition really is.

The latest word on the street was that Microsoft (MSFT 2.03%) will issue an update to its Windows Phone software later this year that brings 1080p compatibility and support for new quad-core processors.

The Verge first reported on the possible changes, along with the rumor that Microsoft will introduce a 5-inch displays or greater, which would push the Windows Phone OS into the phablet realm. Surprisingly, the current version of Windows Phone only supports 720p HD and doesn't work with high-end quad-core processors.

Adding these two enhancements would be a big plus for handset makers selling phones with the Windows Phone OS. Apple's (AAPL 2.54%) iPhone and many Android phones are compatible with quad-core processors, which is where the future of smartphone processors is going. Qualcomm (QCOM 4.32%) and NVIDIA are two of the biggest names in the quad-core processor game, and both companies recently announced the latest versions of their high-end processors over the past few months.

The shift to quad-core means that smartphones can work on more tasks at once, making apps and calculations much faster. Samsung's new Galaxy S4 has the company's own Exynos 5 Octa processor, and is sold as a quad-core phone in some locations and 8-core in others.  Qualcomm is the only chip maker licensed to provide processors for Windows Phones, and with the company continually building faster quad-core processors, Windows Phones need to catch up.

Adding quad-core capability may help Windows Phones compete against rival smartphone software from Apple (AAPL 2.54%) (iOS) and Google (GOOGL 1.77%) (Android). The most important play for Windows Phone OS, though, is to try to take the third spot away from BlackBerry (BB 5.62%). Here's a breakdown of the current OS market share in the United States: 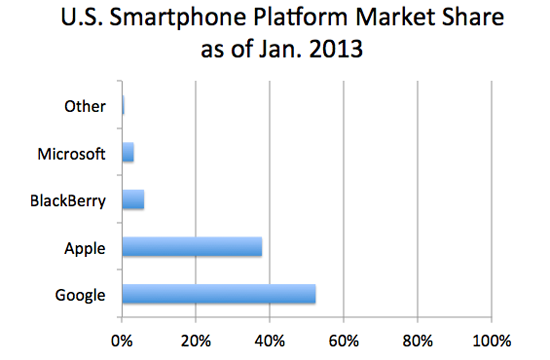 Obviously Apple and Android dominate the OS market, but Windows Phone and BlackBerry seem to be on a back-and-forth path to take the No. 3 spot. Updates to Windows Phone would certainly make it a stronger competitor, but it's still unclear if it will rise up and beat the BlackBerry OS. BB10 hasn't been on the market as long as Windows Phone has, so investors will need to wait a little longer to see how it all plays out.

Better late than never
It's good to see Microsoft updating its OS to keep up with the fast-paced changes of the mobile environment, but I can't help but feel that the OS is just playing catch-up with iOS and Android. With an upcoming release of Windows "Blue" coming later this year or in 2014, maybe Microsoft will launch an OS that truly is ahead, or at least on par, with high-end smartphones. But until then, the company is making a step in the right direction, even if it's been slow to make it.