If you don't already own Costco stock, then you might want to think twice about buying it at today's price.

There are a handful of companies that arguably define every generation of American consumer. For the current generation, it's undeniable that Costco (COST -0.82%) fits this bill. But does that mean Costco stock is a buy? Not so fast.

The biggest problem with Costco as an investment isn't the company itself, but rather the price of its stock. Take the company's dividend yield. At 1%, it's less than half of the S&P 500's 2.12%. Not to mention the fact that both Wal-Mart and Target yield more than 2% as well.

Beyond this, Costco's price-to-earnings ratio -- which gauges how much an investor must pay for every dollar of earnings -- comes in at 23.7. Is that astronomical? No. Lululemon, for example, has a P/E ratio of 35, and many tech companies sport triple-digit multiples.

At the same time, however, the average stock on the S&P 500 trades for 18 times earnings, and both Wal-Mart and Target are valued at multiples between 15 and 16. Looked at it this way, Costco stock sells for a 32% premium over the broader market and a 53% premium over its closest brick-and-mortar competitors.

Suffice it to say, you can probably guess why stock in the warehouse retailer is so dearly priced. In the first place, it's simply a great company. It offers great products at great prices and, by all appearances, takes excellent care of its employees.

Beyond this, the more quantitative explanation is that Costco's stock price has simply outpaced its earnings-per-share growth. As you can see in the chart below, over the past five years, it's returned more than 84% to shareholders since 2008. Yet its EPS has only increased by 57% over the same time period. 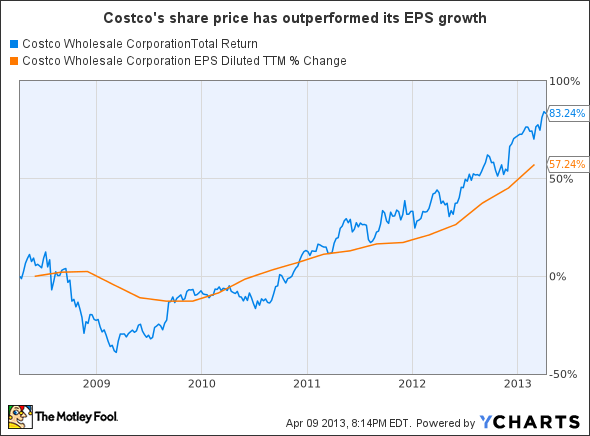 Consequently, unless the latter figure picks up steam and catches the former, there's a risk that the stock price will come down on a relative basis instead.