Just-dumped CEO Ron Johnson got a real pay-for-performance package, which isn't good for him.

Despite the disaster that is its sales strategy, not to mention the apparent confusion that reigns in the C-suite, J.C. Penney (JCPN.Q) stock is at least protected by one lesson learned: Don't give your CEO a golden parachute.

Even though ex-CEO Ron Johnson was unceremoniously dumped by the board of directors in favor of once-and-future chief executive Myron Ullman, he didn't have any special clauses that would make his landing especially cushy should he separate from the company. Not that we need to cry over his pay package, either, but unlike with Penney's former president Michael Francis, the board didn't encrust Johnson's severance pay with gold and diamonds.

Francis, you may recall, was hired in October 2011 and left a mere eight months later, but took with him a fairly rich deal: He got $4.7 million in termination pay, $3.6 million in severance, kept his $12 million signing bonus (which was supposed to be prorated if he left early), and $2 million in stock awards. That certainly eases any anguish he might have felt for presiding over the dismal retailer for less than a year.

Johnson was not so lucky. As the Fool's Adam Levine-Weinberg detailed, Johnson got paid for Penney's performance, which was dismal, therefore so was the pay he received. Hey, when you're getting a base salary of $1.5 million, you don't go scrounging in the seat cushions looking for nickels and dimes, but by CEO standards it was a stingy package he got, too.

He still owns about $12 million worth of J.C. Penney stock, some 893,000 shares received when he was hired because of what he left behind at Apple -- 250,000 restricted shares today worth about $107 million. With J.C. Penney's stock trading below $14 a share at yesterday's close, that is less than half what the shares were worth when he received them. Ouch. 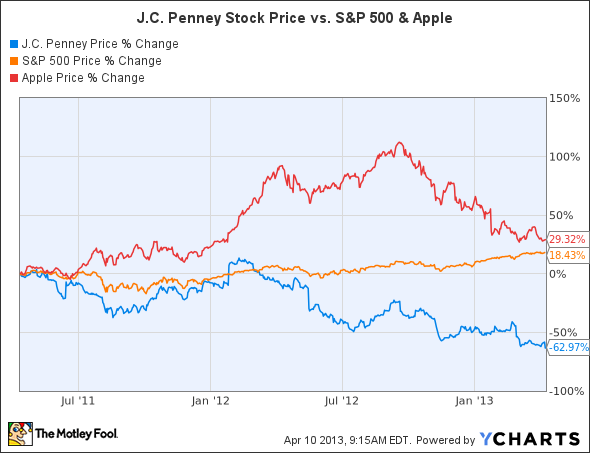 Johnson also owns around 7.3 million warrants that he purchased with $50 million of his own money when he was hired, but with an exercise price of $29.92, it's unlikely they'll be touched anytime soon. Just as unlikely, though, is that they'll even approach breakeven, let alone the $35.37 price he bought them at, unless Ullman performs some kind of miracle.

Certainly Johnson's willingness to agree to such a pay-for-performance scheme indicates he thought consumers would buy into J.C. Penney's everyday-low-pricing strategy, and it's commendable that a CEO was willing to put his money where his mouth is. Unfortunately, other executives will likely look at his experience and opt to forgo having to actually perform for investors before getting a rich payout as they're kicked out the door.