For the same period, crude oil refinery inputs increased by 106,000 barrels per day (bpd), while imports fell by 211,000 bpd. These newest numbers carry forward the previous week's trend, when inputs rose 130,000 bpd and imports fell 227,000 bpd. Overall inventories remain "well above the upper limit of the average range for this time of year," according to the EIA. 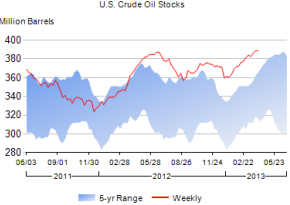 Gasoline inventories rose 1.7 million barrels but remain within their average range. Prices at the pump fell for the sixth straight week to a national average of $3.608, $0.037 per gallon less than the previous week and $0.331 cheaper than a year ago. 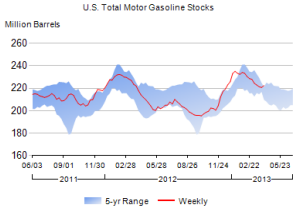 Distillate fuel inventories fell slightly by 0.2 million barrels, keeping inventories low but within their five-year range. After a boost in wholesale demand dropped inventories by 2.3 million barrels the previous week, supply and demand seem to be averaging out for the summer season.