In a rare co-CEO position, these two are leading an international software company during a crucial time.

Over the past few days, I've covered CEOs 25 through 3. Today, I'm going to introduce you to the company with the second-highest-rated CEO, give you some background on the company, and at the end, I'll offer access to a special free report on who is going to win the war between the five biggest tech stocks.

SAP (SAP -1.19%)
You may have seen commercials for this giant German company before, but maybe you still don't understand what it does. In the most basic sense, SAP designs software that allows all the groups that are involved with putting a product or service out -- supply chain managers, sub-contractors, marketers, etc. -- to communicate on a common platform.

In today's global economy, having a set software across a whole company is important, as it makes geographically and intellectually disparate parts of a company communicate effectively with one another.

Without a doubt, SAP is not the only company in the world that provides this type of service. It can count other behemoths like Microsoft (MSFT 0.15%) and Oracle (ORCL -2.05%) among its competitors, too.

A key differentiator, however, is that a company like Microsoft has a number of different irons in different fires -- like search and even gaming. And Oracle also focuses heavily on software outside of just the niche area of enterprise resource planning, or ERP. This means that SAP has the advantage of being slightly more focused on its goal of providing the best ERP experience possible.

This helps explain why SAP has a 22% market share in ERP, followed by Oracle at 15%, and Microsoft Dynamics at 10%.

Co-leaders to guide the way
Unlike all of the other companies on this list, SAP is led by not one, but two CEOs. Bill McDermott has held his title as CEO since joining Jim Hagemann Snabe in February 2010. McDermott joined the company in 2002 as the director of the company's Americas and Asia-Pacific regions.

Snabe was appointed at the same time as McDermott, but has been with the company since 1990, working his way up from sales and consulting roles all the way to the executive suite.

Together, they have put together a company that has increased revenue by 11.3% and earnings by 9.1% per year. 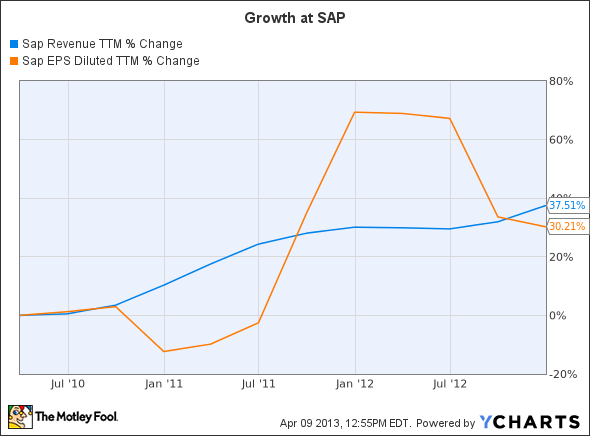 While that might be impressive, its worth noting that this year, SAP's employees not only gave their co-CEOs a 99% approval rating, but the company was also rated one of the top 50 places to work in 2013.

One of the reasons these two may have received such rave reviews is because of the benefits and flexibility the company offers its employees. Being a global company, neither CEO is interested in micromanaging, instead allowing small and diverse teams to function in different parts of the world to meet local needs.

As McDermott told Leaders magazine recently: "While the workforce may be over 60,000, they're in small teams located all over the world. For example, we're innovating in China for China. ... We have innovation labs in all of the BRIC countries."

While recognizing quality leadership is important, it's worth noting that since 2013 began, the approval rating for these two has slipped somewhat, from 99% to 95% -- which would have given them a more modest ranking somewhere between fourth and and ninth.

Either way, you can't make an investment decision based on one ranking alone. This is just a starting place to explore if SAP is right for your portfolio.

Why SAP Stock Plummeted 31.1% in October