While the retailer failed to meet analysts' expectations, it still posted a strong March result.

March was a solid month for Costco (COST -1.54%), and the company posted a 4% increase in comparable sales. The stock was stagnant, though, as analysts had been expecting a 5% increase. But investors shouldn't be alarmed, as the shortfall was due mainly to exchange rates and lower fuel sales. In its press release, the company said that stripping out exchange rates and fuel changes, comparable sales rose 6%.

Costco has already posted a solid beginning to 2013, with its second-quarter comparable sales -- through the middle of February -- up 5%. The company has continued to find success through its disruptive membership model, and investors have rewarded it with a 20% increase in the stock price over the last 12 months. But even at its current price, Costco still looks like a good buy.

Solid management leads the way
Costco's leadership has been focused on meeting its customers' needs since the company's founding. But as evidence of its strategic abilities, the company hasn't been happy just to let its past customers make up the whole of its future customer base. Instead, the company has branched out into business products and homegoods to bring in a new audience.

It has also partnered with local auto dealerships to offer discounts on cars to members. While at the outset this might seem like a gimmick, the theory behind it is brilliant. Costco customers are car owners. In order to get the most out of a membership, you have to be able to transport a huge amount of dog food -- or whatever. Costco members are also deal seekers. You don't just happen into a Costco with a coupon from the paper -- you have to really want to save.

Management recognized that it could provide a new service and attract new customers by partnering with local dealerships, who themselves may become members. That kind of cycle is what makes Costco such a solid business. In short, it's founded on relationships.

Growth for investors
But buying at Costco isn't the only good deal the company offers. Over the last three years, an investment in Costco has proven to be a world beater. The chart below shows the total return from 2010 to today for Costco and its competitors. 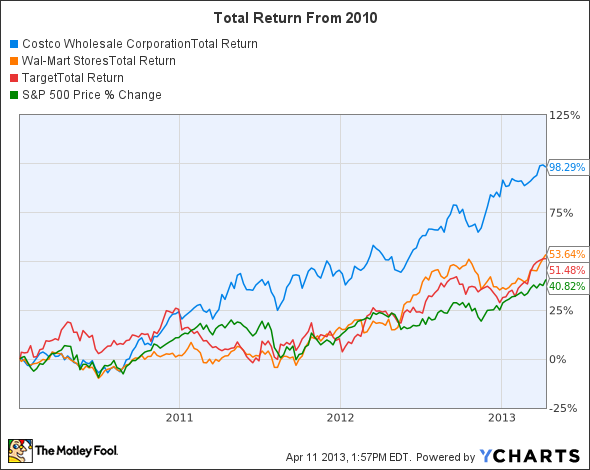 Costco has been the clear winner, beating out both Target (TGT 1.26%) and Wal-Mart (WMT 0.11%). Wal-Mart, in particular, has struggled recently. Reports have come out that indicate the company is having trouble keeping its stores stocked, due to the sheer physical effort required. Target, meanwhile, has had limited success in the last year with its new product lines. The company's tie-in with Neiman Marcus last holiday season was a flop.

The bottom line
With its strong customer base and relationship-focused business plan, Costco represents the better side of American retail. Workers at the company have generally positive reviews of Costco, and the brand has never been stronger. The company isn't cheap, but now looks like a great time to get in, nonetheless.